Mr. Koulikov examines the level of coverage that articles originally published in law reviews receive in eight major general academic databases. His findings are very similar to those of other discipline-specific database coverage studies, and reveal that coverage varies widely by database, regardless of the database’s claim to cover legal periodicals. This has particular implications for the level of engagement that nonlegal scholars have with the literature of the legal academia, and for the potential for meaningful interaction between legal scholars and their peers in other academic fields. 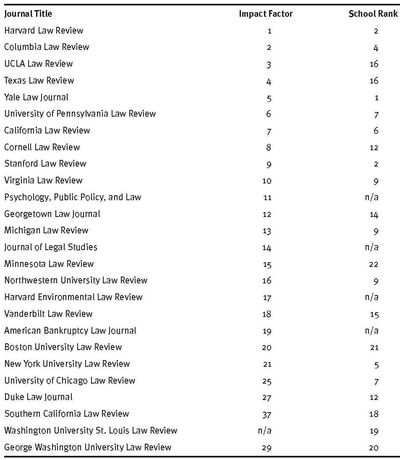 Listed below are links to weblogs that reference Law Review Rankings by Social Science Impact:

Just to clarify, it's important to keep in mind that my study ranks databases by overall coverage of a given sample of law reviews, not individual law reviews by impact or coverage in a number of databases. The chart is simply my sample, and primarily derived from the JCR 'law' category.