Today is Tax Freedom Day, the day on which Americans will have earned enough money to pay all federal, state, and local taxes for the year:

Tax Freedom Day will arrive on April 9 this year, the 99th day of 2010, according to the Tax Foundation’s annual calculation using the latest government data on income and taxes. Americans will work well over three months of the year – from January 1 to April 9 – before they have earned enough money to pay this year’s tax obligations at the federal, state and local levels.
This year’s Tax Freedom Day is one day later than in 2009, but more than two weeks earlier than in 2007. The shift toward a lower tax burden since 2007 has been driven by three factors: (1) The recession has reduced tax collections even faster than it has reduced income; (2) President Obama and the Congress have enacted large but temporary income tax cuts for 2009 and 2010, just as President Bush did in 2008; and (3) Two significant taxes were repealed for 2010 as part of previous legislation, the estate tax and the so-called PEP and Pease provisions of the income tax. 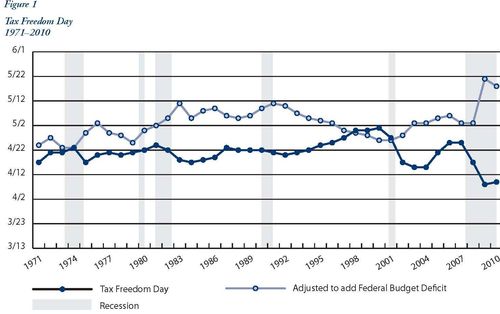 Each state has its own Tax Freedom Day. Alaska’s is earliest on March 26, and Connecticut celebrates last on April 27. High-income states pay much more in federal taxes, and they often have higher state-local taxes as well. Joining Connecticut in the latest celebrations are New Jersey, New York, Maryland and Washington. Alaska is joined in early celebration by Louisiana, South Dakota, Mississippi and West Virginia.

Listed below are links to weblogs that reference Today Is Tax Freedom Day -- Earlier in AK, LA & MS, Later in CT, NJ, NY:

When's Budget Freedom Day? When we've finished earning enough money to actually pay the current-year government budgets (i.e. tax receipts plus deficits)? What month does that fall in? May? June?

Reminds me... I need to make sure the Beatles' Revolver album is loaded in my mp3 player by next week, for my annual blaring of "Tax Man".

Let me tell you how it will be: there's one for you, nineteen for me, 'cause I'm the Tax Man...

By the time Obama gets through, we won't even have Tax Freedom Day. Freedom? What's freedom?