Citing significant budget shortfalls and the inability to collect sales taxes on many Internet-based transactions, a number of states are considering the adoption of "Amazon taxes." Such laws, nicknamed after their most visible target, require retailers that have contracts with "affiliates"—independent persons within the state who post a link to an out-of-state business on their website and get a share of revenues from the out-of-state business—to collect the state's sales tax.

Contrary to the claims of supporters, Amazon taxes do not provide easy revenue. In fact, the nation's first few Amazon taxes have not produced any revenue at all, and there is some evidence of lost revenue. For instance, Rhode Island has seen no additional sales tax revenue from its Amazon tax, and because Amazon reacted by discontinuing its affiliate program, Rhode Islanders are earning less income and paying less income tax.

Amazon taxes also do not "level the playing field" between brick-and-mortar and online businesses; the laws actually mandate disparate burdens on online businesses. Litigation over the constitutionality of Amazon taxes is ongoing, with scholars on the left and right disputing their wisdom and legality.

Enacting an Amazon tax law also sends a signal of hostility to businesses engaged in interstate commerce, runs the serious risk of retaliation from other states and from affected businesses, and undermines efforts to improve the uniformity of state sales taxes. 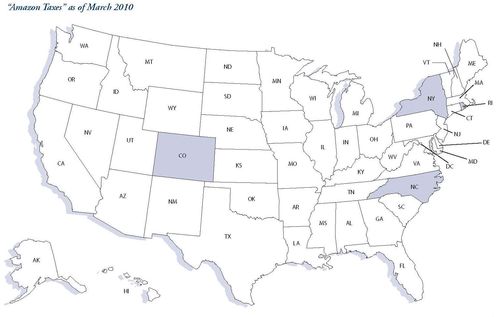 Colorado did not impose a New York-style Amazon law. Instead, the recently enacted statute requires on-line, non-collecting taxpayers to notify each Colorado purchaser that purchases are subject to use tax, and to provide aggregate purchase information annually to the state.