The Tax Policy Center has released a detailed 49-page analysis of the key tax proposals in President Obama’s 2011 budget:

Separate discussions below describe each of the proposals including current law, proposed changes, and, when appropriate, the distributional effects. ...

The budget assumes a baseline in which the 2001-2003 tax cuts are permanent (including the estate tax at its 2009 level), the exemption in the alternative minimum tax (AMT) is permanently indexed for inflation from its 2009 level, and that temporary expansions of refundability of the child tax credit and of the earned income credit are permanent. Those provisions would reduce revenues by $3.8 trillion over the 2010-2020 period. TPC’s analysis measures the impact of the tax proposals not against the administration baseline but rather against a current law baseline that assumes the 2001-2003 tax cuts expire as scheduled in 2011 and that the AMT exemption maintains its permanent level. Against that baseline, the administration’s tax proposals would cause much greater revenue losses than official budget estimates show [$4.9 trillion v. $1.1 trillion]. 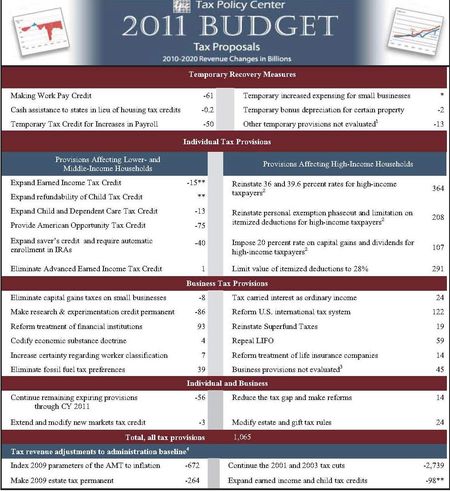 Listed below are links to weblogs that reference TPC: Obama's Tax Proposals Yield $4.9 Trillion (Not the Claimed $1.1 Trillion) Shortfall:

A look at the pdf reveals that the $4.9 Trillion number is bogus. The $3.8 trillion is how much the current tax policy, which is the baseline for the Budget analysis, would cost the government in revenue from 2010-2020. If the 2003 tax cuts were to expire, as assumed in the TPC analysis, this money would be saved by the government. Some of the money saved would apparently however be eaten up in the difference in Obama's tax proposals if you use current tax law or current tax policy as the baseline (or at least as TPC predicts in their report). Nowhere in their report do they claim that "Obama's Tax Proposals Yield $4.9 Trillion Shortfall"

1.1 trillion, 4.9 trillion, 9.4 trillion, who cares? We are out of fingers and toes to count a long time ago. Don't even know how many zeroes a trillion has.

Why not simply entitle the report "Obama Administration's baseline revenue falls $3.8T short of current law baseline". Why talk about any of Obama's proposals? This $3.8T difference would be exactly the same no matter what policy Obama proposed.

"Obama's estimate is either a baldfaced lie, or evidence of utter incompetence."

In simpler terms: Obama's estimate is either a baldfaced lie, or evidence of utter incompetence.

Either way, the man should be shown the door.