The Tax Treatment of Olympic Athletes

Every two years, a topic of conversation among tax folks is the tax treatment of Olympic athletes.  The United States Olympic Committee pays athletes for winning Gold ($25,000), Silver ($15,000), and Bronze ($10,000) medals under its Operation Gold program -- these payments clearly constitute income.  In addition, one court has suggested that the medals themselves constitute income.  In Commissioner v. Wills, 411 F.2d 537 (9th Cir. 1969), the court required Maury WIlls to report as income the value of the Hickok Belt he received for being named athlete of the year, and noted:

The law as it presently exists requires the foregoing conclusion. We dislike it, for we are convinced it is an inequitable result. The next step would be for the Internal Revenue Service to tax the gold and silver in the medals awarded to Olympic Games' winners.

After the Wall Street Journal quoted me saying that the Wills case supports taxing Olympic athletes on the fair market value of their medals, I received this fan letter: 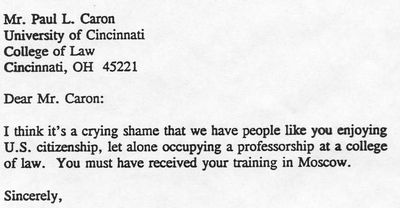 For the tax treatment of Olympic athletes in other countries, see Olympic Prize Money Should Be Tax Free:

With the issue of Olympic prize money in the news, let me get on one of my hobby horses. No, it's not that the men's hockey team shouldn't be getting the money. The Canadian Olympic Committee made the absolute right call in including them.

This has to do with the feeling in this corner that the money should be tax free for most of the athletes, not the men's hockey team, mind you.

It's tax free in such countries as China and Russia and probably many others, but not here.

The Aussies have really got it right. The Australian Olympic Committee waged a $1.1 million, 11-year court battle to make Olympic medal prize money tax-free for its athletes struggling to make ends meet. The only ones who pay taxes Down Under are those earning enough prize and sponsorship to be "carrying on a business of sport, " such as former swim star Ian Thorpe.

That two-tiered system makes perfect sense and let's hope someone in Canada with some clout takes up that fight for the athletes. ... It bothers me that sport, in this case Olympic sport, gets treated as a bastard child when it comes to considering the merits of athletic contributions to society.

Prize money in the arts and sciences – book awards and such – can be considered tax-exempt by the Canada Revenue Agency as a "prescribed prize," which are described in the regulations as those received for "meritorious achievement in the arts, the sciences or service to the public."

Well, winning an Olympic medal at a home Olympics is a “service to the public” these eyes when you consider the feelings of national pride that will be created.

When the COC introduced prize money for the first time for the 2008 Beijing Olympics, they requested and received an opinion from the CRA stating it was taxable income.

Anyway, this is the perfect time for someone to take up this battle for Canada's Olympians. More than the money involved, it's the principle, that what they do should be seen as valuable to their country. Most certainly aren't getting paid much for it.

Listed below are links to weblogs that reference The Tax Treatment of Olympic Athletes:

» Explaining something doesn't mean you agree with it. from Roth & Company, P.C.
If your doctor tells you that you're sick, he's not pro-virus. And if the TaxProf says he thinks the tax... [Read More]

There is much merit in the Australian tax code's division between "carrying on a business" and other earnings, one that I would like to see in the USA. In Australia (at least for the most of my life that I lived there), earnings from lotteries, prizes, games shows, etc were not taxed unless you were a professional game show competitor. Similarly, the Australian tax code considered earnings over a period of 3 years for people whose income was subject to a lot of fluctuation: farmers, actors, sportsmen and sportwomen, for example. I thought that these were good incentives for people to try their hand at risky ventures, such as professional sport. Certainly, Australia's sporting acheivements far exceed the size of its population.

Dear Paul
As you mention Aussies, I thought I could chip in here. In fact, in Australia, athletes much less well known or well remunerated than Thorpie are likely to be found to be in a "business" such that all of their receipts are assessable. This also means that their expenses are deductible. In FCT v Stone [2005] HCA 1, the taxpayer, Ms Stone, was a javelin thrower and a member of the Olympic and Commonwealth games teams. (She was also a part-time police officer and obviously her salary was income). Ms Stone, like many athletes trying to make ends meet, had a manager and had secured some sports company sponsorship. She had also received grants from the Australian Olympic Committee under its medal incentive program, and from the Queensland Academy of Sport, an amount from Little Athletics as "role model" of the year, and prize money from various events (sadly not an Olympic medal). While this sounds like a lot, her total receipts for the year were only $136,000 much of which was to cover her expenses. Only $12,000 was sponsorship.

The High Court concluded that Ms Stone had "turned her sporting ability to account for money" once she had sought and obtained this small amount of sponsorship, and hence was in a business for tax purposes, even though it was accepted that her motives were "idealistic" (excellence in sport and winning medals for Australia) and that she "did not throw javelins for money". The grants and prizes were the "financial product of her athletics activities" as much as the sponsorship. As a result, all of her receipts, including grants and prizes, were assessable to her.

Aren't the Olympics an "amateur" competition?

Surely, cash rewards aren't an important motivator for this class of athlete. Does contingent compensation (as opposed to before the fact support to allow athletes to devote themselves to their sports) really make sense?

Is this, in effect, a way to share the wealth between Olympic athletes with high endorsement income potential and those who lack it because their sport or personality is considered boring?

Wow. That's worth another post in itself (albeit somewhat off the topic of taxes). I wonder what each country pays its players, and how that has translated into performance. As far as I know Thailand has never faired well in the Winter olympics.

The current issue of CFO has a quiz on the Olympics in the back. Here's one.

Answer D. - It didn't mention any taxes, but I'm surprised that half our team doesn't leave to play for them. They have endorsements, too.

I'm agnostic as to whether the US (or Canadian) government should subsidize top olympic athletes, but a tax exclusion would be a stupid way to do it. For the athlete who is really struggling to get by, the exclusion would be worth little or nothing under the progressive income tax. In contrast, athletes who are rich in their own right or married to someone with a good income--and least need assistance--could receive federal and state income tax subsidies worth more than $10,000 for the gold medal. If government subsidies are warranted, it would make more sense to provide a matching grant or tax credit.

(I just want to get some of that fan mail. I'm a professor too, although not at a college of law.)

It was kind of you to leave my signature off the letter above.