The Nelson A. Rockefeller Institute of Government reported today that state tax revenues fell for the fifth consecutive quarter, down 4.1% for the final quarter of 2009:

The decline was biggest in the Southwest (-18.1%); tax revenues increased 0.5% in New England. State tax revenues declined in 39 states: 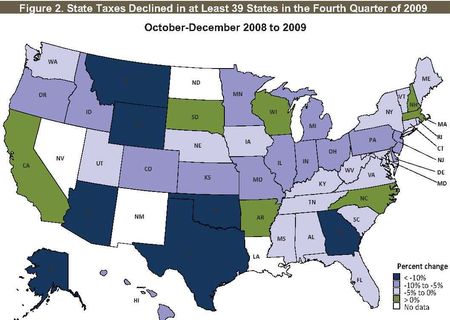 Listed below are links to weblogs that reference State Tax Revenues Fall for Fifth Consecutive Quarter:

State tax revenues in New Hampshire have indeed increased, but not nearly as much as the present tax-and-spend legislature had hoped, leaving a widening gap between revenues and spending. The state is still trying to deal with the budget deficit from the previous budget and have been stymied in their efforts to siphon off private funds from a medical malpractice insurance agency created by, but not funded by, the state.

For some reason, socialists think that the people they want to tax cannot simply go elsewhere. They never learn.

I live in DeKalb County, GA. Here, the CEO, Burrell Ellis, is proposing an 11% property tax increase to cover budget shortfalls. If newspaper reports are to be believed, the usual suspects are shrieking that houses will burn, criminals will roam the streets, children will go uneducated, and flesh-eating zombies will drag us all down to hell, if he doesn't get his way.

If I had a monopoly on force, I guess I'd go for the gun too, every time I had a budget crisis.

He is currently being opposed by the County Commission, which is suggesting a range of other measures, up to and including laying off county employees.

It is probably useful to separate the Oil Patch States (AK, OK, TX) and the mineral states (MT, ID, CO) as they get big swings in revenue based on extraction taxes. The New England states all passed some kind of tax/fee increases this year (but are still in horrible deficit).

But the general conclusion is still valid, all levels of government are going to hurt.