The effective federal income tax rate for the 400 taxpayers with the very highest incomes has declined by nearly half over the past two decades, even as their pre-tax incomes have grown five times larger, new IRS data show. The top 400 households paid 16.6% of their income in federal individual income taxes in 2007, down from 30% in 1995. 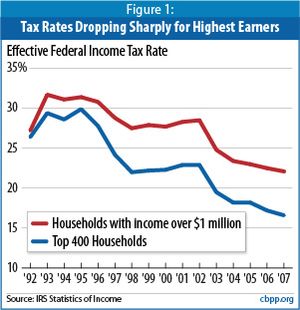 The IRS has released, with not a trace of fanfare, the latest figures on America’s 400 highest incomes. A shame. These new IRS figures deserve fanfare, at least a trumpet blast or two. Our top 400, the new numbers show, have moved into an exalted realm. They now rank among the greatest plunderers of all time. ...

The IRS official figures on top 400 incomes only go back to 1992. But we can assemble comparable totals from earlier IRS data releases.

Listed below are links to weblogs that reference More Tax Return Data on the Richest 400 Americans:

Yes, but consider all the great things they did for society with all those extra untaxed capital gains! CDOs, Goldman Sachs, AIG, fourth houses in the Hamptons...the list goes on and on!