Why Are Professors So Liberal? 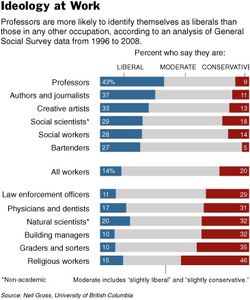 The political liberalism of professors—an important occupational group and anomaly according to traditional theories of class politics—has long puzzled sociologists. To shed new light on the subject, we review research on professorial politics over the past half-century, identifying the main hypotheses that have been proposed to account for professorial liberalism. Using regression decomposition, we examine hypothesized predictors of the political gap between professors and other Americans using General Social Survey data pooled from 1974-2008. Results indicate that professors are more liberal than other Americans because a higher proportion possess advanced educational credentials, exhibit a disparity between their levels of education and income, identify as Jewish, non-religious, or non-theologically conservative Protestant, and express greater tolerance for controversial ideas. Together, the variables linked to our hypotheses account for about 43% of the political gap between professors and other Americans. We conclude by outlining a new theory of professorial politics that integrates these findings, moves beyond existing approaches, and sets an agenda for future research.

New York Times, Professor Is a Label That Leans to the Left:

The overwhelmingly liberal tilt of university professors has been explained by everything from outright bias to higher I.Q. scores. Now new research suggests that critics may have been asking the wrong question. Instead of looking at why most professors are liberal, they should ask why so many liberals — and so few conservatives — want to be professors.

A pair of sociologists think they may have an answer: typecasting. Conjure up the classic image of a humanities or social sciences professor, the fields where the imbalance is greatest: tweed jacket, pipe, nerdy, longwinded, secular — and liberal. Even though that may be an outdated stereotype, it influences younger people’s ideas about what they want to be when they grow up. ...

What distinguishes Mr. Gross and Mr. Fosse’s research from so much of the hubbub that surrounds this subject is their methodology. Whereas most arguments have primarily relied on anecdotes, this is one of the only studies to use data from the General Social Survey of opinions and social behaviors and compare professors with the rest of Americans.

That question has led to many heated debates, particularly in recent years, over charges from some on the right that faculty members somehow discriminate against those who don't share a common political agenda with the left. A new paper attempts to shift the debate in a new direction. This study argues that certain characteristics of professors -- related to education and religion, among other factors -- explain a significant portion of the liberalism of faculty members relative to the American public at large.

The theory is plausible — indeed, it is often advanced by those who deny that intentional discrimination has caused the political inbalance in the faculty lounge.  But as the paper admits, and the Times neglects to mention, the data collected – “provide[s] no direct evidence that [the] theory of professorial liberalism is correct.” (p. 50).  Rather, it draws on other studies, which used surveys to argue that conservatives students did not want to emulate their professors (while liberals did).  That, combined with the clustered cultural characteristics strongly associated with being an academic, lends some support to the selection hypothesis.  But it’s not a true test of the hypothesis.  Indeed, I don’t know how you could test such a selection hypothesis cleanly with observational data.

Moreover, I think the paper understates the role that intentional selection plays: the more time I’ve spent in as an academic, the less sure I am that high education’s anti-conservative tilt  is benign or situational.

Gross and Fosse's argument is, well, highly sociological: people tend to join the group that reflects their values. Choice and corporate identity, rather than institutional discrimination and liberal disdain for conservative ideas, play the most crucial roles in making the academy a bastion of liberalism. ... In other words, liberals are more interested in staying in school than in getting out there and doing something; are more secular; and don't correlate job satisfaction with the economic rewards attached to it. Because future college professors are more liberal, they seek out a workplace that supports a liberal praxis.

Listed below are links to weblogs that reference Why Are Professors So Liberal?:

Professors can be liberal but should be so without belittling students who are conservative or making radical political opinions into classroom indoctrination.