With the estate tax repealed as of today, the economics literature suggests that we may see a surge of deaths (or, at least, reported deaths) among the wealthy elderly:

Joshua S. Gans (University of Melbourne) & Andrew Leigh (Australian National University), Toying with Death and Taxes: Some Lessons from Down Under (2006):

In 1979, Australia abolished federal inheritance taxes. Using daily deaths data, we show that approximately 50 deaths were shifted from the week before the abolition to the week after. This amounts to over half of those who would have been eligible to pay the tax. Although we cannot rule out the possibility that our results are driven by misreporting, our results imply that over the very short run, the death rate may be highly elastic with respect to the inheritance tax rate. 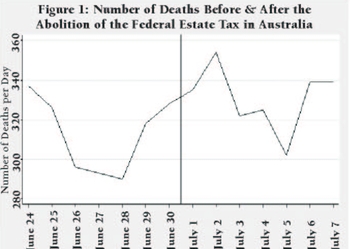 This paper examines data from U.S. federal tax returns to shed light on whether the timing of death is responsive to its tax consequences. We investigate the temporal pattern of deaths around the time of changes in the estate tax system periods when living longer, or dying sooner, could significantly affect estate tax liability. We find some evidence that there is a small death elasticity, although we cannot rule out that what we have uncovered is ex post doctoring of the reported date of death. However, the fact that we find that postponement, rather than acceleration, of death is more likely to occur suggests that this phenomenon is at last partly a real (albeit timing) response to taxation.

Listed below are links to weblogs that reference Jan. 1: A Good Day to Die :

Followed a link from Instapundit, where he was nattering on about it "sounding better in the original klingon", I assume he means the quote "good day to die", which is at least as old as "Little Big Man". Why do fanboiz think the universe starts and ends with Star Trek?

Fortunately, I am not wealthy enough for my kids to start looking at me, and then at electrical sockets, loose wires, Drano, etc...