In less than three weeks, the hated death tax is scheduled to expire—with the rate falling from 45% to zero for 2010. Then the tax will be resurrected in 2011 at a rate of 55%. This bizarre policy dates back to 2001 when Democrats wouldn't let President Bush permanently kill the death tax, so Republicans bet that if the tax were eliminated for one year, it would never come back.

Well, the moment of truth has arrived, and House Democrats recently voted 234-199 to cancel the 2010 repeal and hold the rate permanently at 45% with a $3.5 million exemption. Senate Majority Leader Harry Reid now wants to do the same. But to suspend the Senate's health-care debate and turn to the estate tax, he needs 60 votes. All Republicans and some Democrats are saying no. Blanche Lincoln of Arkansas and Jon Kyl of Arizona will accept no more than a 35% permanent rate with a $5 million exemption.

We've long argued that the economically optimal and fairest death tax rate is zero. The tax is applied to income that was already taxed when it was earned, so it is a double tax on savings and capital. The correct way to tax a gain in the value of assets bequeathed to an heir is with a capital gains tax of 15% when the assets are sold, rather than at the time of the funeral of the original owner.

Democrats also say their rate would apply only to the richest 2% of estates. But a new study by economists Anthony Davies and Pavel Yakovel of Duquesne University finds that the estate tax "impacts small firms disproportionately versus large firms" by encouraging well-capitalized companies to gobble up smaller ones at the owner's death. The study shows the result is to "promote the concentration of wealth by preventing small businesses from being passed on to heirs."  [The Effect of Estate, Inheritance, and Gift Taxes on the Survival of Small Businesses: A Panel Data Analysis.]

Republicans and willing Democrats shouldn't give up on eliminating the death tax. The Kyl-Lincoln amendment to create a permanent 35% rate is far better than the confiscatory House bill. But the best strategic outcome now is to let the death tax expire in January as scheduled under current law, and return to this debate next year when the tax rate is zero. Then let liberal Democrats explain to voters on the eve of elections that they must restore one of the most despised of all taxes.

Here are two of the many interesting charts in the Davies & Yakovel article: 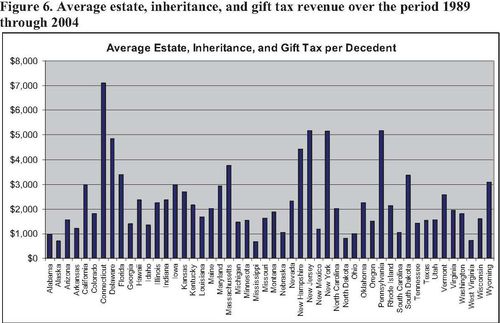 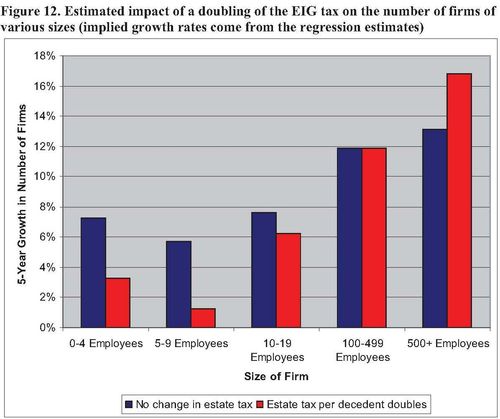 Listed below are links to weblogs that reference WSJ: Let the Estate Tax Expire in Three Weeks:

» Two economists opine that the estate tax concentrates wealth from Future of the Federal Estate Tax
Antony Davies (an associate professor of economics at Duquesne University) and Pavel Yakovlev (an assistant professor of economics at Duquesne University) wrote an opinion piece for the Pittsburgh Post-Gazette, The estate tax, R.I.P.: Contrary to popul... [Read More]

You obviously don't run, or own your own business. I do. I earn between 8% to 12% of my business assets' value per year. What is the return to labor your referring to?

But it's a nice thought.

Gwailo, you are citing a hypothetical that the authors use to illustrate the study's results. Of course it's shallow -- it's a hypothetical.

Read the draft paper that the WSJ cites. It's almost unimaginably shallow. For instance, right on the first page:

"Suppose" we "expect" it "would have to be"? We must assume that owners don't work in the business, since there's no return to labor. We assume proprietorships. Assume 10%. Assume income of $152,000. Why not just "assume a can opener" and be done with it?

I find it interesting that Conn. wins out on the avg tax over the period. Is this chart tracking federal/state combined or federal only or state only or what ? And who was the super mega wealthy dude or dudette that skewed the charts ?

One problem is the rhetoric the politicians use. For example, proponents of the estate tax would describe a $3 million bequest as coming from a "rich" person. However, suppose we're talking about a small business with net assets of $3 million. At a (pick a number) 5% return on assets, that business generates only $150,000 in pre-tax income for the owner. 5% may be low for large firms, but is probably not far off for smaller firms (particularly family farms). Thus, a bequest that looks "rich" in terms of the book value actually generates a middle class income.

Stepped-up basis will retain an exemption of $1.3M or so of tax-free appreciation. That should be enough for most $3M estates.