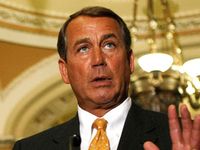 Senate Majority Leader Harry Reid this morning unveiled his 383-page Manager's Amendment to the health care reform bill (H.R. 3590), which includes a variety of tax-related changes.   Sen. Reid replaced the controversial BoTax -- a 5% tax on elective cosmetic surgery -- with a 10% tax on indoor tanning services, effective July 1, 2010.  Perhaps this should be called the "BoehTax" -- named after the perpetually tanned House Minority Leader John Boehner.  (Recall President Obama's jibe at the White House Correspondent's Dinner:  "[John Boehner and I] have a lot in common. He is a person of color. Although not a color that appears in the natural world.").

Listed below are links to weblogs that reference Reid Adds "BoehTax" to Health Reform Bill:

» Bye-bye Bo-Tax. Hello, Tan Tax from Don't Mess With Taxes
In its effort to fund health care reform the Senate has shifted gears when it comes to personal vanity projects. As you recall, Senators first proposed a tax on plastic surgery to be collected by doctors. This 5 percent charge was proposed for purely e... [Read More]

» Tanning your way to national health care from Roth & Company, P.C.
Among the foolish provisions in the foolish Harry Reid healthcare bill, the 10-percent tax on tanning bed services is getting... [Read More]