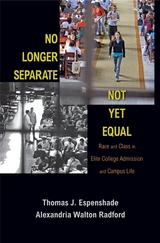 Inside Higher Ed, The Power of Race, by Scott Jaschik:

Is the glass half empty or half full?

Thomas J. Espendshade, a professor of sociology at Princeton University, used that question to answer a question about his new book, No Longer Separate, Not Yet Equal: Race and Class in Elite College Admission and Campus Life (Princeton University Press), co-written with Alexandria Walton Radford, a research associate at MPR Associates. In fact, he could probably use the glass image to answer questions about numerous parts of the book.

While Espenshade and Radford -- in the book and in interviews -- avoid broad conclusions over whether affirmative action is working or should continue, their findings almost certainly will be used both by supporters and critics of affirmative action to advance their arguments. ...

Unlike much writing about affirmative action, this book is based not on philosophy, but actual data -- both on academic credentials and student experiences -- from 9,000 students who attended one of 10 highly selective colleges and universities. (They are not named, but include public and private institutions, research universities and liberal arts colleges.)


Advantages by Race and Class on the SAT and ACT at Selective Colleges, Fall 1997

Listed below are links to weblogs that reference Race & Class in Elite Colleges:

No Sol, asians did not come here as slaves. They came initially to work the gold fields then were actively recruited by the railroads as laborers. Certainly there was massive discrimination but Asians were not brought here a slaves.

What dastardly act of history are Asians guilty of to warrant being penalized by affirmative action?
I don't recall slave ships sailing to China ...

I wouldn't infer too much on the Asian vs. White class rankings...unless there is also additional information on majors. My observation is that more Asians are in technical and difficult majors which are not helpful to class rank.

BasicallyBlue, if you think that the relative SATs of all these ethnicities has magically changed over the past decade, I'll smoke what you've been smoking.

As for "upper middle class": That would be the Stuff White People Like crowd. Those would be the people who are related to other professors, administrators, and "moderate" politicians; and/or, have been working in non-profits during high school and were involved in the student newspapers. We're not talking about the children of sales managers or members of ROTC here.

These data are apparently from 1997, twelve years ago. Why would any serious researcher be considering them significant as a measure of today's culture?

Asians were not slaves of the railroads. Asians came for the cash -- a lot more than was available to the (largely) Cantonese population at the time.

Whether they were treated well is another matter and, candidly, not one that is really susceptible to the sort of "gloss over" thinking that is so often used. In the end, the Chinese and Japanese communities have greatly prospered while other communities have had more mixed results.

The advantage to upper middle class as opposed to middle could have a couple of factors. My first impression is that this is a group that can more likely pay close to full price of tuition, would get less financial aid and thus help fund everyone else.

Also, it may be due to the combination of other factors. Since Blacks and Hispanics go to college in much less numbers (by percentage of overall group) then Upper Middle Income Blacks and Hispanics almost get to pick their school and may be benefiting from a sort of bidding battle to get higher income minorities in the elite schools. This could be skewing this number upward.

If you define affirmative action as a way to use a quality other than merit to select a person for a position or educational opportunity, race and means based testing are merely the second act. The first affirmative action that ever existed went and still goes to legatees, the wealthy and politically connected who use their influence to gain access for their relatives who do not merit the position. Present day affirmative action provides a similar benefit to different classes (from the above data the lower class, black and hispanics). I will not render judgement about the value of straying from merit, other than to say that when people of merit are denied what they have earned, they will stop working.

Is a breakdown by race and class available? Example: % of Hispanics in Quintile 3 who were of upper and upper middle income.

Does the study also compare scores to later achievement and/or completion of degree requirements?

A couple oddities: (1) Why is there a +50 advantage to being upper middle class (relative to middle)? (2) Asians underperform on class rank (relative to whites) despite coming in with higher SATs.

asians really get a raw deal. Did you know they came to America as slaves to build the railroads?