How the Tax Law Fuels the College Sports Arms Race

Many booster clubs are recognized as charities under the federal tax code. At Florida and Georgia, to name just two universities, the athletic departments are set up as charities. Universities also have access to tax-exempt financing when building ever-larger stadiums and arenas. Boosters and donors benefit from generous tax deductions when they buy the best seats or endow an athletic scholarship. That’s right: colleges now endow their quarterbacks and linebackers the same way they do a distinguished chair of American literature.

If college presidents really wanted to halt the college sports machine, they could try two options. They could insist that athletic departments operate within their university budgets, like the English or biology departments; or they could ask Congress to rescind the tax breaks on the commercial income earned by athletic programs. 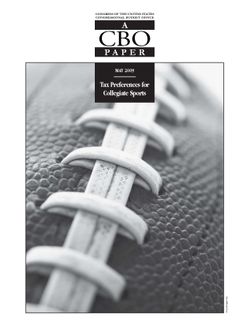 Such large sums raise the questions of whether those sports programs have become side businesses for schools and, if they have, whether the same tax preferences should apply to them as to schools in general. This CBO paper compares athletic departments’ share of revenue from commercial sources with that of the rest of the schools’ activities to assess the degree of their commercialization. It also discusses some of the issues that might arise if the Congress decided to alter the treatment of intercollegiate sports programs in the tax code. ...

The study also examines the issues that might arise if policymakers decided that some or all of the activities of the schools’ athletic programs were primarily commercial rather than educational—a decision that would greatly reduce or eliminate the rationale for giving those activities preferential tax treatment. The Congress could change the tax treatment of revenue from those activities in several ways, for example, by limiting the deduction for contributions, limiting the use of tax-exempt bonds, or limiting the exemption from income taxation. ...

[R]emoving the major tax preferences currently available to university athletic departments would be unlikely to significantly alter the nature of those programs or garner much tax revenue even if the sports programs were classified, for tax purposes, as engaging in unrelated commercial activity. As long as athletic departments remained a part of the larger nonprofit or public university, schools would have considerable opportunity to shift revenue, costs, or both between their taxed and untaxed sectors, rendering efforts to tax that unrelated income largely ineffective. Changing the tax treatment of income from certain sources, such as corporate sponsorships or royalties from sales of branded merchandise, would be more likely to affect only the most commercial teams; it would also create less opportunity for shifting revenue or costs.

Listed below are links to weblogs that reference How the Tax Law Fuels the College Sports Arms Race:

A post-script: As to the final paragraph of the fatuous statement by the CBO with regard to revenue and expense shifting, there is hereabouts an (in)famous case of a large (many billion-dollar) charity with a separate commercial arm that was accused of shifting revenues to the charitable foundation and costs to its taxable entity. The IRS had no trouble at all seeing through that effort to shelter income and avoid taxes.

It's not a question of whether college sports is run like a business; it is. The question is whether the revenues of sports programs revert back to the college general fund to further the core mission of education, or whether those funds are retained by the athletic department to pay the costs of running a sports program that on its face is only tangentially relevant to education. If the former, then a tax exemption can be justified; if the latter, then the taxman should be getting his cut, as with any business. Not to be overlooked in this matter is that the gender and racial makeup of most high-level sports programs bares little or no resemblance to the composition of the student body, despite Title IX. if there was ever a marker that says men's college sports is a for-profit business not an educational program, then all you have to do is watch TV these days and ask yourself whether the gifted athletes you see performing on the football field every Saturday are representative of the student body as a whole or, instead, short-timer employees who are auditioning for high-paying jobs with professional sports teams.

It seems insane to me that universities can sell the best tickets for a nominal face value (say $60) while requiring a tax-deductible 'mandatory donation' for each seat that can run into the hundreds or thousands of dollars for a season. It's an incredible scam -- making the buying of prime, high-priced college football tickets largely tax-deductible.

Why is the NYT picking on college sports? Over the last 20 years, the definition and role of a non-profit seems to have expanded quite a bit. Now there are many, many well-heeled foundations that really just shill & lobby for one or another partisan goals. They are not and maybe never were charities in the truest spirit of the word yet they are treated like a charity for tax purposes.

If I were emperor, I'd consider a one-time wealth tax against some of them to pay for some of the stimulus boondoggle and reduce the deficit. For instance, the PEW Trust has a $4 Billion endowment and it is not a charity. The Southern Poverty Law Center is sitting on about $100-$200 Million in its endowment. It's not right IMO.

Yeah tax it. Why not? Gotta pay for the graft after all! And if it has the unintended consequence of ruining something millions of people love-who cares? At least the government got the money it deserved.

"Such large sums raise the questions of whether those sports programs have become side businesses for schools...."

Oh come on! The question is whether they are CORE businesses of some universities. Michael Lewis covers this expropriation model in "The Blind Side".

Whew! If any member of Congress, much less any state legislator, stepped into this minefield, it would be political suicide. Do not count on this going anywhere.

The Bearcats are 11-0 and you are complaining?

A number of scholars have written about this issue, including John Colombo (Illinois) (see http://papers.ssrn.com/sol3/papers.cfm?abstract_id=1336727).