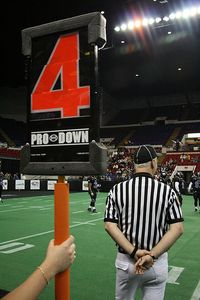 Bill Belichick, coach of my beloved New England Patriots, has been pilloried in the media for going for a first down Sunday night on 4th and 2 from his own 29-yard line with a little over 2 minutes remaining while leading the Indianapolis Coats 34-28.  It turns out that Belichick was following the advice of UC-Berkeley economics professor David H. Romer, whose paper, Do Firms Maximize? Evidence from Professional Football, makes the statistical case for going for it on 4th down in virtually all situations, including the one facing Belichick:

Figure 4 combines the analyses of kicking and going for it by showing the number of yards to go where the estimated average payoffs to the two choices are equal as a function of the team’s position. On the team’s own half of the field, going for it is better on average if there is less than about 4 yards to go. After midfield, the gain from kicking falls, and so the critical value rises. It is 6.5 yards at the opponent’s 45 and peaks at 9.8 on the opponent’s 33. As the team gets into field goal range, the critical value falls rapidly; its lowest point is 4.0 yards on the 21. Thereafter, the value of kicking changes little while the value of going for it rises. As a result, the critical value rises again. The analysis implies that once a team reaches its opponent’s 5, it is always better off on average going for it.

Indeed, Sports Illustrated wrote about an Arkansas High School football coach who has taken this advice to heart and always goes for it on 4th down; his team has not punted since 2007 (Just Go for It! A Coach's Case for Kicking Conventional Wisdom to the Curb).

Listed below are links to weblogs that reference Bill Belichick, Moneyball Savant?:

» The football plays we don't see from Roth & Company, P.C.
When the Patriots went for it on fourth down Sunday night and failed, I thought it was the right decision,... [Read More]

Scratch that, I see it was his own 28 yard line. Still, does the Moneyball account include a situation where if you kick the ball far enough, your opponent is very unlikely to have enough time to get a t.d.?

But a pretty sure field goal puts the game out of reach for the opponent, so I don't understand the strategy here.

There are not enough bad things that can happen to Belijerk.

Belichick's been pilloried only because his team lost. Had the refs been more generous (or accurate, arguably) in spotting the ball, the Pats would have killed the clock, and Belichick would be hailed as a genius. Of course good decisions can have bad consequences, just as bad decisions can have beautiful results, but that kind of fundamental intellectual honesty is foreign to most public discourse.

By the way, I suspect that two-point conversions are more efficient than their rarity would imply, too.

I think this is an example of where common sense outweighs Moneyball. One of many, I suspect.

Arguably 4th-and-2 isn't a passing down either for the same reason--the likelihood of success is probably higher with running plays. But in either case, surely the correct strategy is some variety of mixed strategy (random selection between runs and passes). If my intuition that a run has a higher chance of gaining two yards is correct, then the mixed strategy will involve more running than passing, but passing some portion of the time is essential (to prevent an easy defense against the run). The same logic applies when considering the two-play sequence of 3rd and 4th down. Run/run might be the way to go, but sometimes you have to go with pass/pass. You can't judge the coach's strategy based on one incident.

Of course, if you're going for it on 4th down, then 3rd down and 2 isn't a passing down. Oops.