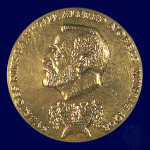 At the end of the President's comments on his being awarded the Nobel Peace Prize this morning, a reporter shouted out, "What are you going to do with the money?" The President didn't answer.

My understanding is that the prize this year is estimated to be $1.4 million. The ceremony takes place in December; I assume the prize is awarded then and that thus the amount is included in income for 2009.

My guess is that, since his 2009 tax return will surely be made public and given the content of his remarks this morning, the President will give a great deal of the prize money to organizations eligible for the charitable contribution deduction (although which ones to choose must be a challenge; I wonder if he might choose to make the gift to the United States for public purposes).

His AGI for 2008 was $2,656,902, mostly from sale of his books. I assume that, leaving aside the Nobel Prize award, this figure is likely to be higher this year because his candidacy encouraged book sales. If so, he will have no trouble giving away the Nobel Peace Prize money without running up against the 50% AGI limits on charitable deductions.

But if he did run up against the 50% AGI limits, § 74(b) would allow him to transfer money directly from the Nobel Prize Committee to a charitable or governmental recipient without the amounts becoming part of his gross income. Indeed, I once researched this provision for a local scientist who won a large prize from the government of another country and wanted to make use of it and learned it was enacted in good measure for Nobel Prize recipients. (Sadly for the winner of the prize, the other government at the last minute declined to transfer funds to the community foundation identified, believing, despite an opinion of counsel, that this would be some kind of tax shelter.)  Publication 525 now contains detailed guidance on the application of  § 74(b) to winners of "Pulitzer, Nobel, and similar prizes."

But, it seems to me, that even if the 50% AGI limit were a problem, the President would nonetheless decide not to use § 74(b) because he would as a political matter need to show both that he took the Nobel Prize money into income and that he made charitable contributions of it on his publicly disclosed tax return -- the tax benefit of  § 74(b) would be too great a public relations detriment to him. That is, using § 74(b) might look to the public, as it did to the foreign government, that he was somehow sheltering income. Often, we think that that exclusions from income have advantages over deductions -- exclusions do not figure into AGI in calculating limitations for the charitable contribution deductions, the medical deduction, etc. But ironically, public disclosure and its public relations function may constrain the use of legitimate and beneficial tax provisions.

Listed below are links to weblogs that reference Tax Consequences of President Obama's Nobel Prize:

» Obama's Nobel Prize tax implications from Don't Mess With Taxes
Every time a prominent American gets a Nobel Prize, tax geeks scurry to examine the tax implications of the monetary reward. The exercise is particularly interesting this year since we have a sitting president winning the Nobel Peace Prize. In addition... [Read More]

igor, you are such a racist (at least that is what I'm told about people who criticize BHO)

I read about Mr. Obama award in the newspaper. On the same page there was a news about the new American 25.000 pounds bomb for destroying a deep covered targets. Is that ironic or it is ironic? By the way, your text is great.

"No title of nobility shall be granted by the United States: and no person holding any office of profit or trust under them, shall, without the consent of the Congress, accept of any present, emolument, office, or title, of any kind whatever, from any king, prince, or foreign state." - United States Constitution, Article I, Section 9

When is Congress going to vote on it? That seems a much more pressing question than the tax consequences of the prize.

What do taxes and the Noble Prize have to do with each other? Obama wants to tax Cokes while the Coca-Cola Company was more deserving of a Nobel Peace Prize for it's "I'd like to teach the world to sing" commercial (Post below).

"The prize or award is transferred by the payer directly to a government unit or tax-exempt charitable organization as designated by [the recipient]."

So all Mr. Obama has to do is direct the Nobel Committee to give the money to a qualified organization and he won't have to worry about any other issues.

I disagree. Using section 74(b) should not cause political fallout. If anything, the public would find it counter-intuitive that Obama could be taxed on Noble prize money when he gave all of it away to charity.

I think he'll give it to charity and benefit from sec. 74, to the extent that he can, certainly there is room for a good exam question here. A rather silly choice, by the way. It demeans the prize regardless of what one thinks of Obama.