Is $5,500 Golf Cart Credit Emblematic of "Tax Policy in the Age of Obama" 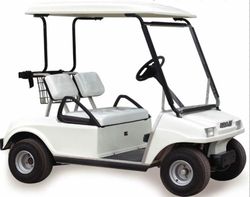 We thought cash for clunkers was the ultimate waste of taxpayer money, but as usual we were too optimistic. Thanks to the federal tax credit to buy high-mileage cars that was part of President Obama's stimulus plan, Uncle Sam is now paying Americans to buy that great necessity of modern life, the golf cart. The federal credit provides from $4,200 to $5,500 for the purchase of an electric vehicle, and when it is combined with similar incentive plans in many states the tax credits can pay for nearly the entire cost of a golf cart. ...

This golf-cart fiasco perfectly illustrates tax policy in the age of Obama, when politicians dole out credits and loopholes for everything from plug-in cars to fuel efficient appliances, home insulation and vitamins. Democrats then insist that to pay for these absurdities they have no choice but to raise tax rates on other things—like work and investment—that aren't politically in vogue. If this keeps up, it'll soon make more sense to retire and play golf than work for living.

When someone told me that the federal government pays a tax credit for the purchase of a golf cart, covering one half to two-thirds of the cost, I was suspicious. The source is a Wall Street Journal Article: Cash for Clubbers, Wall Street Journal, Oct. 17, 2009. The article mentions a "Golf Cart Man", offering to lease and eventually purchase golf carts from individuals who buy a golf cart and apply for a tax credit. The golf cart purchaser ends up $2,000 richer in the Golf Cart Man's scheme. While the Wall Street Journal is a reliable source, I decided to try and check the information against the actual statutes, regulations, rulings and notices.

While the language of the statute appears to exclude golf carts, numerous golf cart dealers' web sites claim that the IRS has authorized certain models to receive the credit. This could be true. The prospective cart purchaser should ask to see an IRS acknowledgment letter before they buy. See Notice 2009-54, I.R.B. 2009-26.

The 2009 American Recovery and Reinvestment Act, 111 P.L. 5; 123 Stat. 115; 2009 enacted H.R. 1, section 1141 made amendments effective for vehicles acquired after December 31, 2009. It appears to extend the termination date, reduces the maximum credit to $7,500 regardless of weight, changes the phase out rules and makes other changes. See RIA Checkpoint's Analysis of the American Recovery and Reinvestment Act of 2009, Section 1002.

While the Wall Street Journal article appears to be mostly true, I question their statement that the golf cart credit is an example of "tax policy in the age of Obama". It appears this tax credit was originally created before Obama took office.

Listed below are links to weblogs that reference Is $5,500 Golf Cart Credit Emblematic of "Tax Policy in the Age of Obama":

» Golf car credit controversy from Don't Mess With Taxes
That headline is correct. The official name of these country club vehicles is golf cars, not carts. And the distinction comes in handy under a tax credit for all-electric vehicles. You might have seen the feature on the golf car tax break this morning ... [Read More]

One solution to local transportation needs is the vehicle in this video, with the bonus that it would encourage tidy street right-of-ways: Drunk on riding lawnmower. (Did the cop really have to pepper-spray him?)

Where's his cash-for-clunkers award? He needs it for beer money.

Cities in Fayette County, GA, now have over 100 miles of multi-use cart paths that connect towns and neighborhoods, shopping facilities, schools, parks, etc., and the golf cart is the prominent means of movement on them.

These paths are jointly used by walkers, bicyclers, and cart users. There are licensing requirements, age requirements, and driving regulations in place for the carts. I've talked with the county planner and there are plans to expand this over the entire county.

However, the rebate-qualifying vehicles, as I understand them, would seem to create more of a problem on those paths and would discourage their purchase. The carts of choice, golf carts, are used on the paths and small streets and are not appropriate for major roads. The vehicles with the tax breaks may work on roads but may be too fast for the paths.

What's interesting is that nearby Atlanta has similar paths along an abandoned expressway right-of-way through a left-wing neighborhood (appropriately, to the Carter Presidential Library), and those paths are clearly marked "No Motorized Vehicles." I think those in-town folks, who buy most of their groceries at Whole Foods, believe that a powered vehicle is "cheating" on healthy living (they mostly look anemic) and represents their wealth-envy of those who purchase golf carts. So, no change would be expected there. As a result, their roads are more packed, street parking is a mess, gas is expensive, and pollution is worse. Too bad.

There are also many "rails-to-trails" projects here and around the country that could help take traffic off of throughfares and reduce accidents. Those path regulations would have to be modified to accomodate carts rather than just joggers...if, that isn't cheating, too.

Taking full advantage of these paths requires a more comprehensive review and expansion of what vehicles qualify for tax benefits, and more common sense could be used in making those choices.

Star Electric Vehicles posted their IRS certificate on their website. The carts on this site have low speed vehicle (NEV) packages.

Golf should indeed be subsidized. Our overworked politicians and executives would not be nearly as efficient without their frequent therepeutic outings on the Greens. And its much easier to negotiate a deal when you have a freindly wager going on simultaneoously.

I spend a reasonable amount of time in a community in Florida with over 2,000 residences that have private streets. The primary form of transportation is the golf cart. In Florida, you are also allowed to use golf carts on certain sidewalks. People go the grocery store, etc. in their carts. With a little solar panel on your roof, good by foreign oil.

Which brings up an important point. The government, both federal and state, should stop pushing highways. They need to push "low-ways". For example, people could take their golf cart to the train station instead of their car. Bikes can use the low-ways. It would be nice to get our fat kids off of expensive school buses and on to bikes. We cannot build our way out of an every increasing population that uses foreign oil on crumbling infrastructure.