The New Fiscal Sociology: Taxation in Comparative and Historical Perspective 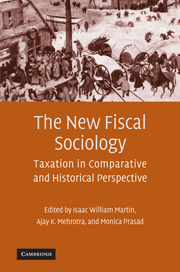 The New Fiscal Sociology: Taxation in Comparative and Historical Perspective demonstrates that the study of taxation can illuminate fundamental dynamics of modern societies. The sixteen essays in this collection offer a state-of-the-art survey of the new fiscal sociology that is emerging at the intersection of sociology, history, political science, and law. The contributors include some of the foremost comparative historical scholars in these disciplines and others. They approach the institution of taxation as a window onto the changing social contract. Their chapters address the social and historical sources of tax policy, the problem of how taxes persist, and the social and cultural consequences of taxation. They trace fundamental connections between tax institutions and macrohistorical phenomena – wars, shifting racial boundaries, religious traditions, gender regimes, labor systems, and more.

Listed below are links to weblogs that reference The New Fiscal Sociology: Taxation in Comparative and Historical Perspective: