Michael Nieswiadomy (University of North Texas, Department of Economics) has posted LSAT Scores of Economics Majors: The 2008-2009 Class Update on SSRN. Here is the abstract:

Using 1994-1995 and 2002-2003 data, Nieswiadomy (1998, 2006) found that economics majors scored well on the LSAT. These results are frequently posted on university web sites by Economics and other departments. This note, which updates the prior studies using current 2007-2008 data for the 2008-2009 class of students entering law school, finds that Economics majors still perform at or near the top of all majors taking the test. Economics majors (LSAT score of 157.4) are tied for first (with Philosophy) of the 12 largest disciplines (those with more than 1,900 students entering law school). Economics is tied for second (with Philosophy/Religion (157.4)) behind Physics/Math (160.0) in a set of 29 discipline groupings that are created to yield at least 450 students with similar majors. 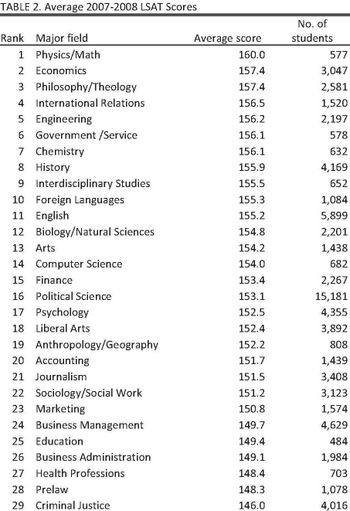 I suspect there's one major contributing factor to this: most top schools lack any sort of "criminal justice" or "pre-law" major (as well as many of the low-performing majors), while all of them have physics, math, philosophy, etc. Based on an informal reporting of average LSAT score for students of various universities taken from LSAC data(http://www.top-law-schools.com/forums/viewtopic.php?f=2&t=19882), nearly all of the top universities (Harvard, Yale, Stanford, Pomona, UPenn, Duke, Dartmouth, Columbia, etc.) simply do not offer majors in most of the low-scoring subjects, which will of course skew the results in favor of those majors that are offered.

A much more reliable indicator would be the performance of students at the same university by major. I would imagine the results would be much less stratified.

Uh, might this have something to do with the fact that most physics majors are a good deal smarter than most people who major in criminal justice?

Reminds me of my own 1995-style DIY firm website. www.thewestonfirm.com, also a DIY project!

As an econ major I'd like to argue that it makes you smarter than other majors, but there is another factor here explaining this.

A large number of top colleges (e.g., Harvard College) don't have business or accounting majors, so those who want to study there topics figure, that economics is the next best major, resulting in economics being the most popular major at most top colleges. Obviously Harvard et al undergrads do very well on standardized tests so this skews the average LSAT scores of econ majors upward.

If you were to adjust these figures by the average LSAT scores of fellow students at the same school, a lot of the variation would be eliminated.

It would be useful to get an idea of what caliber of school offers which majors. Many 'top' schools don't even have a degree-granting program in "criminal justice" or "prelaw."

Given that Econ ties with Philosophy, doesn't Philosophy deserve a flag in the title?

Interesting. I wonder if it is because the math/physics/econ types are most equipped by training to get through the logic puzzles on the LSAT quickly and efficiently. An extra question or three correct, particularly if you are in an LSAT year where both logical reasoning sections are scored, would really boost the averages above, I would think.

Is it surprising that these types of students are good at the kind of abstract thinking that the LSAT measures? The real question to me, is, can they write and do traditional research? I imagine their writing skills are not as developed in the math and science disciplines as they should be in others, but who knows.

Is there a similar study based on GPA's? If so, can the study be overlayed upon this one to see what the best combination of GPA and Major is? I can imagine what it is now, but their might be some surprises at the bottom of the top third - where more and more schools dream to recruit from.