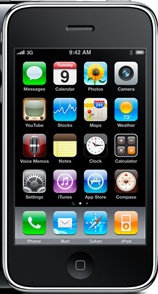 Five Apps for the Lawyer, by Lauren Hirsch:

It's official. The iPhone has come into its own in the legal world. It took a little time, and lawyers are notorious Luddites (you can pry the WordPerfect out of their cold, dead hands) but they do like Bright Shiny Objects, and nothing fills the lapel pocket like an iPhone.

The iPhone finally cracked the law-firm standards stranglehold by virtue of its compatibility with Microsoft Exchange, which freed lawyers from the non-choice of "would you like a Blackberry, or a Blackberry?" Granted, the Blackberry still seems to have a better handle on business needs, but for some, the iPhone is worth getting to know.

It should go without saying -- I will say it, though -- many of the productivity apps that are useful to everybody are useful to lawyers, so two of these apps are not strictly law-related. (See if you can spot them! It's a brain teaser and a post!) Also, certain obvious apps don't exist yet, such as a standalone LexisNexis or WestLaw legal research app. That said, the web will suffice for now. In fact, though I've artificially constrained myself to only standalone applications, the iPhone really shines for accessing web research sites given that Mobile Safari is (mostly) a full-featured browser. So, without further ado, here are five apps that give a glimpse into what the iPhone can do for attorneys.

Since I started iPhone J.D. last Fall, I have reviewed over 100 iPhone apps and written about a number of other topics that are still relevant today. Well, maybe "100" sounds too high—sometimes I discuss several different apps at the same time instead of devoting a full post to a single app—but suffice it to say that I have written about many different apps that attorneys and others might enjoy having on their iPhones. You can always search for old posts by using the search box at the top right of every page, but I thought it would be useful to have a single index of all of the major posts on iPhone J.D. so that you can easily browse through prior posts. Moreover, in my law firm alone, I know of a large number of people who bought an iPhone very recently, and for new iPhone users who are relatively new to this site, browsing the index is a good way to catch up on what you have missed so far. There are a lot of great apps out there.

So here is a list of the more significant posts on iPhone J.D. since I started the website on November 17, 2008, including reviews of iPhone apps, reviews of other items and other significant posts. I have also added a link at the top right of this website called "iPhone J.D. Index" and I will keep that index updated in the future. As of today, however, here is the full index for your browsing pleasure.

Listed below are links to weblogs that reference Five iPhone Apps for Lawyers: