On April 15, I blogged Joe Thorndike's proposal advocating public disclosure of all tax returns.  Andy Rooney came out in favor of the idea on his 60 Minutes segment on CBS:

Continuing my coverage of the Placement Success component of the 2010 U.S. News Law School Rankings, which counts 20% in the U.S. News methodology: the chart below compares the Employed at Nine Months data (14%) with the school's overall ranking: 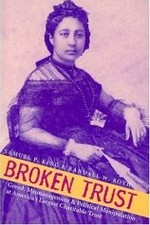 Prof. Roth and Samuel P. King published the bestselling book, Broken Trust: Greed, Mismanagement, and Political Manipulation at America’s Largest Charitable Trust (University of Hawai‘i Press, 2006), which was named 2007 Book of the Year by the Hawai‘i Book Publishers Association.  They donate all of their royalties to local charities. Thanks to a special arrangement with the publisher, Prof. Roth is able to give copies of the book to interested professors and students at the schools that he visits.  (Hat Tip: Grayson McCouch.)

Howard E. Abrams (Emory) has posted Now You See it, Now You Don't: Exiting a Partnership and Making Gain Disappear on SSRN.  Here is the abstract:

In this Article, three methods of exiting are partnership are examined. Each exit strategy offers significant tax advantages to the nonexiting partners. In two of the exit strategies, well-known defects in Subchapter K are exploited, and I conclude that the strategies cannot be attacked successfully by the government using either the detailed rules of Subchapter K or by resort to the partnership anti-abuse rules. However, the third of the exit strategies seeks to exploit language in a treasury regulation in a manner plainly not contemplated by the drafters and which yields a result inconsistent with the structure of subchapter K. I conclude that this exit strategy can be attacked successfully by the government. The two successful strategies show that in many cases the exit of a partner can be used to defer significant amounts of income.

The Path to Law Teaching at Harvard

On March 13, 2009, the IRS released Chief Counsel Advisory 200911007, concluding that unmarried co-owners of a residence were limited to mortgage interest deductions on $1 million of acquisition indebtedness. CCA 200911007 reasons that the $1 million limit should be applied per residence rather than per taxpayer. This article criticizes the IRS position.

Continuing my coverage of the taxpayer's attempt to have the district court reconsider its decision in In re G-I Holdings, 369 B.R. 832 (D.N.J. 2007), based on affidavits to be supplied by Senate Finance Committee staffers on the meaning of a tax transition rule:  the Government yesterday filed its Brief in Opposition. Attached to the motion are several remarkable documents, including:

Continuing my coverage of the 2010 U.S. News Law School Rankings:  I turn next to the Placement Success component, which counts 20% in the U.S. News methodology.  The chart below compares the Employed at Graduation data (4%) with the school's overall ranking.  64 law schools did not supply U.S. News with this data.