Judge Denies Law Profs' Injunction Against West, But Signals They May Succeed on Merits of Claim That West Put Their Names on "Sham" Supplement

Earlier this month, I blogged Two Law Profs Sue West for Putting Their Names on a "Sham" Supplement to Their Treatise: 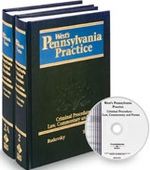 David Rudovsky (Penn) and Leonard N. Sosnov (Widener) are suing West, claiming that they were falsely identified as the authors of a poorly researched “sham” supplement to their treatise, Pennsylvania Practice:  Criminal Procedure Law, Commentary and Forms.  The authors stopped working on the treatise when West cut their annual pay from $5,000 to $2,500 each.

The professors sought an immediate injunction on the ground that the supplement "was so poorly researched it would harm their reputations if allowed to remain on library shelves."  The National Law Journal reports that Senior U.S. District Judge John P. Fullam last week denied the injunction on the ground that "the harm has already been done," but signaled great sympathy for the professors' case on the merits:

[T]he four-page decision by Fullam appeared to provide only a empty victory for West. Fullam seemed to strongly hint that the professors will likely succeed in proving their claims under the Lanham Act as well as state defamation claims, but cannot show that an injunction at this stage would do any good.

"Although plaintiffs had no role in authoring the pocket part, defendant West made it appear that they had indeed authored the pocket part, with aid from members of the publisher’s staff," Fullam wrote. "To make matters worse," Fullam wrote, "the quality of that particular pocket part was not up to standard." Fullam found that "few if any relevant court decisions were included in the publication," and that readers were "not informed that some cases cited in earlier volumes had since been reversed or modified." .

Fullam concluded that while the plaintiffs had proven they were harmed, they had failed to prove that they risked suffering any further irreparable harm. "It seems clear that plaintiffs have established a right to some form of remedy -- damages to reputation come to mind -- but it would seem that the harm has already been done, and that, if plaintiffs do require further injunctive relief I order to complete their remedy, such relief would be just as effective after final hearing," Fullam wrote.

Listed below are links to weblogs that reference Judge Denies Law Profs' Injunction Against West, But Signals They May Succeed on Merits of Claim That West Put Their Names on "Sham" Supplement: