The Congressional Budget Office yesterday released Historical Effective Federal Tax Rates: 1979 to 2006 and Data on the Distribution of Federal Taxes and Household Income.  From the Director's Blog: 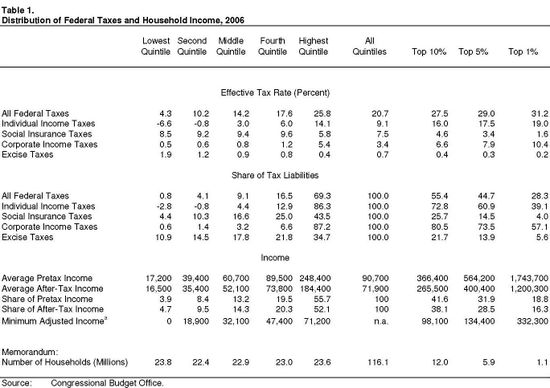 They also control 90% of the wealth.

Thank you for this revealing summary of tax data. It depicts the ultimate moral hazard threatening our society. A majority basically pays no income taxes. Therefore, it is logical to vote all manner of spending, because someone else will foot the bill. The Fair Tax and Flat Tax supporters have tried to address this issue to no avail. A new approach might work. See it at www.hedgehogparty.com

I would guess that the number of people and earners in each quintile is different. Studies have shown a strong correlation between single parent families and lower income. I infer from that that the higher income groups have more married couples and more two income families than do the lower quintiles.

I'm immediately suspicious of the "Social Insurance Taxes" rate differences in the lower quintiles. Even the kid who works minimum wage for one week over the summer pays the same FICA and Medicare rates as someone who makes $90,000/year. The numbers are also too low in that they don't include the "employer contributions" -- in fact, if you included the invisible-to-most-employees "unemployment insurance" tax, the first quintile ought to be paying a higher rate on the "social insurance" line than the other quintiles.

If you think this is lopsided, just wait until Obama finishes "rebalancing" the tax code.

Will be interestng to see this same set of data again in 8 years.