The Tax Foundation announced today that Tax Freedom Day -- the date on which Americans will have worked long enough to have earned enough money to pay this year's tax obligations at the federal, state and local levels -- will be April 13 this year:

This is eight days earlier than in 2008, and a full two weeks earlier than in 2007, for two reasons: (1) the recession has reduced tax collections even faster than it has reduced income, and (2) the stimulus package includes large temporary tax cuts for 2009 and 2010. ...
Tax Freedom Day moves somewhat independently from an alternative calculation that adds the federal budget deficit to total taxes collected. In 2009, an unprecedented budget deficit over $1.5 trillion produces a date of May 29. This is the latest date in the year this deficit-inclusive measure has ever fallen. The only previous years when taxes and deficit spending comprised a similarly large share of national income were 1944 and 1945, at the peak of World War II. In the postwar era, this date had never fallen later than May 9 (in 1992). Figure 1 below shows Tax Freedom Day as traditionally presented and with the inclusion of the federal budget deficit, since 1967 (click to enlarge). 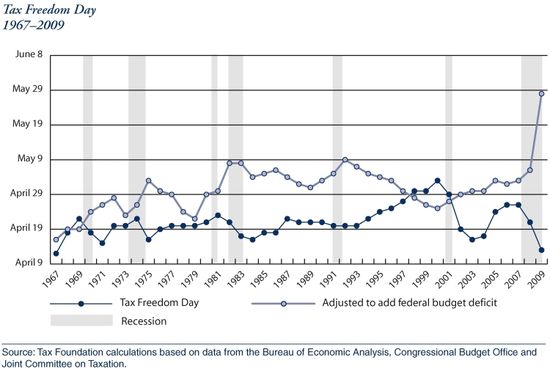 Here are the ten states with the heaviest tax burdens and the latest Tax Freedom Days:

Here are the ten states with the lowest tax burdens and the earliest Tax Freedom Days:

Listed below are links to weblogs that reference Tax Freedom Day Is April 13:

Just remember that tax freedom day came earlier for the feudal peasants (they only had to work 50 days for their lords).

I would love to see how those top ten lists work out in terms of state budgets, either in surplus or deficit.

It would probably not be a huge shock to discover that those states with the lowest tax burdens have the least amount of budget problems.

But hey, why apply that to the federal level? That's just WAY too logical for the federal government.