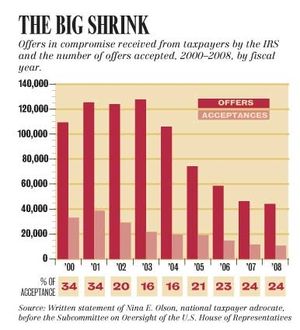 At the start of the new year, the IRS announced steps to help struggling taxpayers buffeted by the deepening recession. But two of its most effective tools have become virtually "dead letter" programs because of agency roadblocks that too few taxpayers can navigate.

Tax practitioners across the country voiced long-simmering anger and frustration with the agency's handling of the so-called offer in compromise (OIC) and the partial-payment installment program even as these lawyers experience an increasing number of taxpayers seeking their help because of job losses or home mortgage problems. And their frustrations are backed by data from the national taxpayer advocate.

"It's absolutely the most abusive unit within the IRS in the way in which they treat taxpayers," said W. Calvin Bomar, a partner at Atlanta's Bomar & Phipps and a former attorney in the IRS' office of chief counsel, referring to centralized IRS units that review offers made by taxpayers to settle their tax liability for less than the amount owed. "Under no circumstance do they want to approve an offer in compromise. I'm talking about people who are destitute and entitled to relief under that program."

Bomar, who said he never gets excited or passionate ("I'm a tax lawyer"), clearly is angered by how the program, which he and others consider a major tool that helps both taxpayers and the government, is not working. ...

National Taxpayer Advocate Olson, an independent ombudswoman appointed by the secretary of Treasury, told a House oversight committee recently that she hears "regularly" from tax practitioners who have given up on the offer-in-compromise program because of administrative and legislative obstacles.

"Moreover, tax professionals tell me that, given the low possibility of the IRS accepting an offer, they are advising their clients to file for bankruptcy," she said. "When that happens, the IRS generally will collect less than through the offer in compromise."

Olson said offers are good deals for both the taxpayer — who removes the threat of enforced IRS collections hanging over his or her head for the next 10 years — and for the government, which gets as much revenue as possible and requires the taxpayer to remain in full compliance for five years.

Partial-payment installment agreements — a second collection alternative for struggling taxpayers — are also beneficial to both parties, she said, and are underutilized.

Listed below are links to weblogs that reference NLJ: Struggling Taxpayers Hurt by Shrinking OIC and Partial-Payment Programs:

It is simple math. If the IRS would take the time to figure out how much money they could bring they might actually begin using it.

Could the IRS intransigence be a byproduct of those annoying TV commercials for firms like Associated Tax Relief which show smiling folks sitting on a beach and laughing about how they settled with the IRS for pennies on the dollar? I mean they completely misrepresent how settlement offers work and make it seem like they have some kind of inside track to wiping out your tax debt. The IRS may very well see everyone filing for an OIC as a scammer out to game the system based on how easy these commercials make it seem to do.

It is positively absurd that the citizens of an ostensibly free republic tolerate a byzantine tax code that robs us of far more than the revenue actually collected. For crying out loud, we actually have lawyers and accountants whose entire careers are wasted on this, instead of being available for productive work.

I believe that these roadblocks stem from the underlying beliefs on the part of government regarding taxes - that all money is theirs, and any money they do not take from you is a sign of their own benevolence. Consider that any reduction in your tax liability is considered an expense to them. Money that was never theirs is an "expense?" Not in the real world! With such a mindset, is it any wonder that they refuse to reduce the amount of "their" money you pay? To them it is the equivalent of someone taking your wallet and offering to give back only half of the contents. The problem is, that wallet was our in the first place, not theirs. It is time they were reminded of that fact. Oyster out.

This reminds me of a conversation I had a few years ago while I was still practicing a lot:

Me: We finally received a response to our Offer in Compromise, and it is a two page rant about how we are liars and criminals. I've never seen anything like this.

Revenue Officer: I bet the letter was from Susie Smith [fake name].

Revenue Officer: Susie is crazy. She can't work as a Revenue Officer, because she would scream weird stuff and obscenities at the taxpayers and the CPAs and lawyers.

Me: So couldn't they fire her?

Revenue Officer: This is the federal government Tom, what do you think?

Me: So they let her do offers.

Revenue Officer: Ya, she sits in an office by herself, no taxpayer contact, and once in a while she will review a file, reject the offer, and write a crazy letter to the taxpayers. She can retire in four more years.