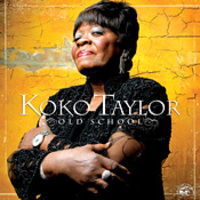 I previously blogged the sad case of Grammy-winning blues singer Koko Taylor, who is 80 years old and in poor health:

Her income has dropped precipitously, her expenses haven’t, and she has little savings or other hard assets besides a house in a Chicago suburb that Zillow.com figures is now worth only $280,000.

Nevertheless, the IRS says Taylor must pay $400,000 in back taxes, penalties and interest. Otherwise, she faces the possibility the G-men will grab most of her income, including royalties and Social Security, and maybe even her home. The feds rejected her offer to take out a reverse mortgage on that house and pay $200,000 plus up to 50% of any future net revenue, moves that would allow her to remain in her residence and live out her remaining time with her second husband.

The Tax Court yesterday held that the IRS did not abuse its discretion in refusing to accept her proposed offers in compromise, upheld the IRS's tax lien and levy against her, and upheld the IRS's refusal to abate tax penalties.  Taylor v. Commissioner, T.C. Memo. 2009-27 (Feb. 5, 2009).  In its conclusion, the Tax Court appeared to take a swipe at Tom Daschle, Tim Geithner, Nancy Killefer, and Hilda Solis:

Both petitioner and respondent repeatedly commented on petitioner's stature as a beloved and well-known professional singer as support for their respective positions in these consolidated cases.  We disagree with both parties insofar as they contend that a taxpayer's celebrity status is somehow relevant to what this Court must do in deciding whether the Commissioner's collection action may proceed. Every taxpayer, no matter how famous or notorious, has a legal obligation to honestly report and pay his or her income tax liability each year and is entitled to fair enforcement of Federal tax laws. ...  Respondent gave petitioner ample opportunity to rectify her failure to pay estimated tax when due and considered petitioner's collection alternatives in accordance with applicable administrative and legal requirements.

Listed below are links to weblogs that reference Tax Court Takes Swipe at Daschle-Geithner-Killefer-Solis in Making Koko Taylor Sing the Tax Blues:

I don't see how the result could have been any different in this case.

Her disposable income is $6,000 a month. She grossed at least $150,000 per year for the years in question. That is not "little income". And this income is even after her heart attacks.

She never provided any substantiation of her claimed expenses.

Even Daschle and Geithner paid what they owed (I believe with interest, but without penalties).

For those who wish to give her some benefit due to her age, remember that plenty of other people are still rich (and poor) when they're old, and still pay their taxes. As an off-the-cuff example, would you have let Leona Helmsley off if she had not paid taxes when she was 80? If you would rather advocate that elderly people shouldn't have to pay any federal income taxes, that's fine, but that's not the law.

The Taylor case is a classic example of what is terribly wrong with the IRS OIC program as it is currently being enforced. We have an 80 year old woman whose only significant asset is her home. She offered to borrow 200k- about 2/3 of the liability, and to enter into an agreement to pay 1/2 of her income over a certain threshold. Nevertheless the IRS decided that it made more sense for them to seize and sell her home (which by the IRS' own calculations would have resulted in proceeds) of 240k. The balance they hope to collect by seizing any income that this insulin dependent diabetic singer manages to eke out over her remaining years.

I guess the kinder gentler IRS is history.

Hi Geithner, pay those taxes yet?

So to assure the public that justice is blind and everyone must pay their taxes, the hammer falls on an 80-year-old woman, with little income, and only the house she lives in.

I look forward to the hammer falling on Daschle, Geithner, Killefer, and Solis. But I’m betting it’s a much softer hammer, kinda like the one Moe hit Curley with, and for those involved, results in the same winks and smiles when the cameras are off.

Increasingly, income taxes are for the politically unconnected. You know, us little people.

(On a non-snarky note, great blog, thanks for all the hard work.)

Everybody wins. Well, except the gov't that taxes too much and gives too little in services.

Too bad, this is exactly the type of thing that reverse mortgages are best at, providing needed cash, while allowing the senior to remain in their home, payment free for the rest of their life.

She should offer to make the IRS her heir to the home so when she passes they can sell the house and reap any benefit over the loan payoff. Our calculator shows that with an expected 4% increase in home value (the 80 year average) there would be about $50K in equity after 5 years.IF the home goes down in value, the FHA insurance that comes with a reverse mortgage would take care of any difference.

Ridiculous. So, they're going to seize the house and get an extra $10 or $20 grand after selling fees IF Zillow is right about the value and IF they can find a buyer...and throw her into the street to boot.

Reverse mortgage is perfect for this situation and the IRS is trying to get blood from a stone.

Perhaps the Tax Court was referring to Republican douchebags and tax cheats like Sarah Palin, Joe the Retarded Plumber and Sun Myung Moon.

It is likely that Judge Marvel (or her clerks) wrote that sentence well before the tax problems of Obama's nominees came to light. The sentence may apply to them, but it certainly was not written because of them.

...this is great....very alice in wonderland type stuff.....all the comments about what Ms. Taylor owes and whom shoudl pay what.....well these exclude the documented fact that the 16th amendment was never really ratified and we are the ones being victimized everyday by a corrupt, illegitimate government entity......she owes nothing because there is no law.......but those with power, guns and judicial robes have now shown themselves to not even care to hide their corruption any longer....

They appeared to take a swipe at Taylor herself. It is amazing how far some people in attempting to criticize those they view as dishonest, will engage in dishonesty themselves. And by "some people" I mean you (just so we are clear -- unlike your conclusion about the judges dicta).

Ah, right. But when the fair enforcement part goes away, I suspect the obligation will be seen as catch me if you can. Almost all taxpayers self-report honestly. I expect that to drop precipitously this year. Obama had better plan for a shift to Italian style tax collections.

For example ... when noted tax fraud Tim Geithner was caught cheating on his taxes by Obama's vetting team, he was allowed to pay back taxes on income he knowingly hid from the IRS without penalty.

There are two tax codes ... one for black people like Ms. Taylor, and the other for white people like Tim Geithner.

Everyone should pay their tax and interest for late payment.

It's the draconian penalties the IRS imposes for short-term late deposits that are obscene, usurious, and seem to have been wholely avoided by the DC insiders despite the comparatively long-term nature of their delinquencies.

if a spouse has a tax lien against his business (as Hilda Solis' husband) and they file joint returns,is she also legally responsible?

A couple of reliable Revenue Officers have told me that
the Service assigns incompetent and personality challenged employees to the Offer in Compromise program, because it is where they can do the least damage.

In at least one situation I can confirm that an incompetent employee with psych problems was rejecting OICs and accusing allof the taxpayers of fraud.

What a great system!