Is Kwame Kilpatrick's Lawyer Angling for a Cabinet Appointment? 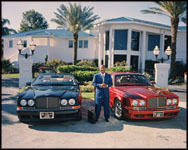 The Web site of the so-called "Giant Killer" is wallpapered with photos of the Stuart, Fla., resident posing outside a mansion, with Bentleys and his custom-designed, 32-passenger Boeing 737 dubbed "Wings of Justice II." ...

Listed below are links to weblogs that reference Is Kwame Kilpatrick's Lawyer Angling for a Cabinet Appointment?:

Birds of a feather...

A Fulton County judge has ordered prominent trial lawyer Willie E. Gary to pay his former paramour $6 million in child support payments. Gary, who claimed in court papers to have a net worth of $60 million, had former Atlanta Mayor Bill Campbell by his side through most of the depositions and March's trial.