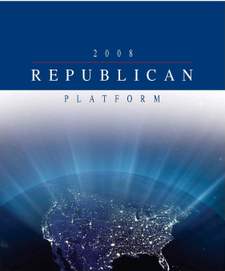 The most important distinction between Republicans and the leadership of today’s Democratic Party concerning taxes is not just that we believe you should keep more of what you earn. That’s true, but there is a more fundamental distinction. It concerns the purpose of taxation. We believe government should tax only to raise money for its essential functions.

Today’s Democratic Party views the tax code as a tool for social engineering. They use it to control our behavior, steer our choices, and change the way we live our lives. The Republican Party will put a stop to both social engineering and corporate handouts by simplifying tax policy, eliminating special deals, and putting those saved dollars back into the taxpayers’ pockets.

The Republican Agenda:  Using Tax Relief to Grow the Economy

Sound tax policy alone may not ensure economic success, but terrible tax policy does guarantee economic failure. Along with making the 2001 and 2003 tax cuts permanent so American families will not face a large tax hike, Republicans will advance tax policies to support American families, promote savings and innovation, and put us on a path to fundamental tax reform.

Lower Taxes on Families and Individuals

America’s producers can compete successfully in the international arena — as long as they have a level playing field. Today’s tax code is tilted against them, with one of the highest corporate tax rates of all developed countries. That not only hurts American investors, managers, and the U.S. balance of trade; it also sends American jobs overseas. We support a major reduction in the corporate tax rate so that American companies stay competitive with their foreign counterparts and American jobs can remain in this country.

Promoting Savings through the Tax Code

We support a tax code that encourages personal savings. High tax rates discourage thrift by penalizing the return on savings and should be replaced with incentives to save. We support a plan to encourage employers to offer automatic enrollment in taxdeferred savings programs. The current limits on taxfree savings accounts should be removed.

Over the long run, the mammoth IRS tax code must be replaced with a system that is simple, transparent, and fair while maximizing economic growth and job creation. As a transition, we support giving all taxpayers the option of filing under current rules or under a two-rate flat tax with generous deductions for families. This gradual approach is the taxpayers’ best hope of overcoming the lobbyist legions that have thwarted past simplification efforts.

As a matter of principle, we oppose retroactive taxation, and we condemn attempts by judges, at any level of government, to seize the power of the purse by ordering higher taxes.

Because of the vital role of religious organizations, charities and fraternal benevolent societies in fostering charity and patriotism, they should not be subject to taxation.

In any fundamental restructuring of federal taxation, to guard against the possibility of hypertaxation of the American people, any value added tax or national sales tax must be tied to simultaneous repeal of the Sixteenth Amendment, which established the federal income tax.

The Democrats Plan to Raise Your Taxes

The last thing Americans need right now is tax hikes. On the federal level, Republicans lowered taxes in 2001 and 2003 in order to encourage economic growth, put more money in the pockets of every taxpayer, and make the system fairer. It worked. If Congress had then controlled its spending, we could have done even more.

Ever since those tax cuts were enacted, the Democratic Party has been clear about its goals: It wants to raise taxes by eliminating those Republican tax reductions. The impact on American families would be disastrous:

All that and more would amount to an annual tax hike upwards of $250 billion — almost $700 per taxpayer every year, for a total of $1.1 trillion in additional taxes over the next decade. That is what today’s Democratic Party calls “tax fairness.” We call it an unconscionable assault on the paychecks and pocketbooks of every hard-working American household. Their promises to aim their tax hikes at families with high incomes is a smokescreen; history shows that when Democrats want more money, they raise taxes on everyone.

Listed below are links to weblogs that reference Tax Planks in the 2008 Republican Party Platform:

» http://dontmesswithtaxes.typepad.com/dont_mess_with_taxes/2008/09/the-conventions.html from Don't Mess With Taxes
The conventions are winding down and then the real fun begins. Word is that in accepting his party's nomination tonight, some folks are encouraging John McCain to talk about taxes. That should get the prime-time ratings right up there with Barack Obama... [Read More]

All this talk about taxes is just a bunch of tripe. Do the math America. Add up the extra expense of gasoline, health insurance, and pharmaceuticals. Factor in the rising cost of food and the lowered value of your house. Taxes are the least of my worry. I do worry that my taxes are paying for a lied-for-to-get war and Bin Laden is still out there. The Republicans simply want to channel your money into their pockets while the economic house of cards they've built collapses. McBush, just like the bushes that we have already "elected" will continue bowing to the whims of the mega-corporation. The march to "democratized Fascism" will accelerate if McBush is elected. In the end we are doomed if the electorate does not learn the most basic of skills: think for yourself and do the math.

Back in the 1980's the Reagan Administration wasn't too concerned about HYPERTAXATION when "tax policy" was substituted for the language in section 111(a) of the Internal Revenue Code. As a result of this substitution, the gross income attributable to an itemized deduction recovery could exceed the amount of the recovery by up to 50 percent. How? IRS instructions included itemized deduction recoveries in the calculation of taxable Social Security benefits. It is worse now because the taxable portion of Social Security benefits has increased to 85 percent and other items subject to modified AGI phase-outs have been included in adjustments to income.