New Evidence on Taxes and Income: The Poor Are Getting Richer

The new Census Bureau data on income and poverty reveal that many of the economic trends in this country are a lot more favorable than America's detractors seems to think. In 2007, overall real median family income increased to $50,233, up $600 from 2006. The real median income for intact families -- mother and father in the home -- rose to $78,000, an all-time high.

Although incomes fell sharply in the U.S. after the dot-com bubble burst in 2000 (and still haven't fully recovered), these latest statistics reflect a 25-year trend of upward economic mobility. More important, Barack Obama is wrong when he states on his campaign Web site that the economic policies started by Ronald Reagan have rewarded "wealth not work." Based on this false claim -- that the rich have benefited by economic growth while others have not -- he intends to raise tax rates on high-income individuals.

To be sure, there has been a massive amount of wealth created in America over the last 25 years. But tax rates were cut dramatically across the income spectrum, for rich and poor alike. The results?

When all sources of income are included -- wages, salaries, realized capital gains, dividends, business income and government benefits -- and taxes paid are deducted, households in the lowest income quintile saw a roughly 25% increase in their living standards from 1983 to 2005. (See chart nearby; ...) This fact alone refutes the notion that the poor are getting poorer. They are not. 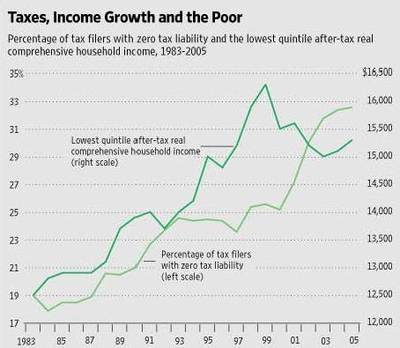 Listed below are links to weblogs that reference New Evidence on Taxes and Income: The Poor Are Getting Richer:

First, I suspect what matters here is the decline from 1999-2005, not the increase from 1983-2005. The poor feel poorer because they can't buy what they used to. Second, that increase of $600 is way lower than inflation has been. Third,
heck, I feel poor and I'm in the middle quintile. What does this chart look like for the second and third quintiles? It's this emotion of "I feel poor" that Obama is tapping into. Yes, both candidates are factually wrong in several of the things they say, but voters care about the way they feel.

I notice Laffer made no attempt to defend Bush or discuss the post-Clinton era - not surprising.

there are so many fantastic claims in this article each one meriting a response. it reads more like "who you going to believe, me or your lying eyes?"

Does anyone really believe the CPI numbers. If you apply a more realistic inflation number (fuel and food, no hedonic adjustments, and cost of housing, not the bogus owner's equivalent rent), real incomes have dropped sharply since 2000. So it's not that people just feel poorer, they really are poorer.