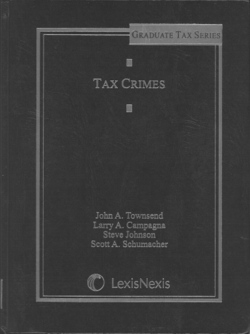 The Graduate Tax Series is the first series of course materials designed for use in tax LL.M. programs. Like all books in the Series, Tax Crimes was designed from the ground-up with the needs of graduate tax faculty and students in mind:

Five other books in the Series also are available for adoption:

Listed below are links to weblogs that reference LexisNexis Publishes Tax Crimes: