CTJ: Assessment of "Fair Share" of Tax Burden Must Include Payroll Taxes 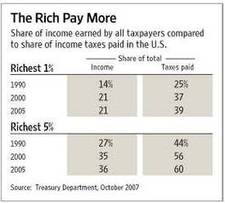 Washington is teeing up "the rich" for a big tax hike next year, as a way to make them "pay their fair share." Well, the latest IRS data have arrived on who paid what share of income taxes in 2006, and it's going to be hard for the rich to pay any more than they already do. The data show that the 2003 Bush tax cuts caused what may be the biggest increase in tax payments by the rich in American history. The Journal uses the IRS figures to create the impression that the poorer half of Americans are contributing almost nothing to federal revenue while the wealthy are providing the bulk of it. ...

Do the rich pay too much in taxes? Has the tax code become even more progressive as a result of the Bush tax cuts? Of course not. The share of taxes paid by the rich looks large and growing only because the Wall Street Journal ignores the tax that affects the poor and middle-class most heavily — the payroll tax.

The nearby table combines both the federal income tax and the federal payroll tax into the total amount of federal taxes paid by each income group in 2007.

Listed below are links to weblogs that reference CTJ: Assessment of "Fair Share" of Tax Burden Must Include Payroll Taxes:

The EITC was introduced to reduce the regressive nature of the social security contributions for the working poor. As the EITC has expanded, that effect has increased as the increased credit has become a "negative tax" increasing the "after tax" income of working poor. It would be interesting to see the relative numbers if the EITC was included.

The payroll tax isn't a tax, because lifetime payroll taxes are directly linked to retirement benefits. This is unlike taxes on ordinary income, capital gains, dividends, and estates. They are certainly a burden because the rate of return on them is so low, but this is a far cry from a tax. If one truly believes that they are a tax, then the necessary corollary to this is social security is an unworthy program.

John, by the same token aren't the fruits of a modern economy that sprang from our (small "l") liberal institutions also income to those on the top? Compulsory education got to the place it did exactly because of the demands of the corporate labor market for workers with that minimum level of education. National transportation infrastructure was also designed for business needs before all others. If universal health care becomes law, this will be a benefit to American firms who will be set on an equal competitive footing to foreign firms (and GM must be kicking itself for not getting behind that decades ago).

A lot of social programs can be viewed as having distinctly economic impacts. Standardize the minimum education of the total workforce and training becomes more efficient. Decouple health (and retirement) benefits from the employer or industry and both firms and labor have more flexibility to move to more efficient structures and opportunities and avoid lock in.

Fair enough in a way. But by similar reasoning, should income also include a range of personally-consumed government services as well? If your family is consuming a "free" education and "free" health care, isn't this just income by another name?

At least universal K-12 education has a social payback, but a lot of what the government spends on our behalf falls in the category of things that will make America fat rather than strong.

All these analyses, whether by the WSJ or the CTJ, are pushing political agendas. The real shame is that the partisan divide is so deep in this country that no one dreams of seriously discussing the American social contract (as relates to such key assumptions of Medicare, savings, and so forth).