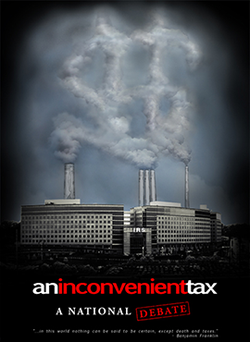 Life Is My Movie Entertainment Co. is at work on a documentary film, An Inconvenient Tax.  Here is the synopsis:

Ask any of the millions of tax paying Americans on April 15th if the current tax system has problems and you'll get a clear answer. Complexity, inequities and international pressures top the ever-growing list of concerns. The last major tax reform in the United States occurred in 1986. Since this bipartisan effort to simplify the tax code, over 16,000 changes have been made, creating an inflating bubble of complexity that is ready to pop. This looming issue coupled with the expiration of the Bush Tax cuts in 2010 have economists, congressmen and concerned Americans scrambling to figure out a direction for immediate reform

Should Congress try to repair the tax code's inequities by moving towards a broader based income tax similar to that of 1986 or should it pursue a consumption-based system such as a flat tax, VAT or national retail sales tax? Also, can America's schizophrenic desires for lower taxes and increased social programs be reconciled?

An Inconvenient Tax explores the answers to these questions and more through interviews with world renowned economists, U.S. congressmen and average citizens across the nation. The pursuit of a better tax code requires a search for the nations identity. As Joseph Schumpeter wrote, "The spirit of a people, its cultural level, its social structure, the deeds its policy may prepare - all of this and more is written in its fiscal history..."

In order to shed light on America's current tax dilemmas, the film will look at the history of taxation in America as well as current tax-systems in other parts of the world. It will also follow a middle-class small business owner as he tries to pursue the American dream. As every aspect of his life is touched by the effects of taxation, the film will pose both the benefits and dangers of change. The next direction for U.S. tax policy will be decided soon, and it is imperative that the country learn from its past and design a system that will benefit its future.

The filmakers have assembled a distinguished group of almost two dozen interviewees for the film, Including Tax Profs Michael Graetz (Columbia) and Dan Shaviro (NYU).

Listed below are links to weblogs that reference An Inconvenient Tax:

» An Inconvenient Tax from Club for Growth
Via Instapundit, there's a new movie in the works.... [Read More]

The only way to reform the tax code is to greatly simplify it via a consititutional amendment. That would require a successful grassroots effort that by-passed (or coerced) the existing political stucture.

This could be achieved if everybody got something they could count on. My proposal is a balanced budget , a single income tax rate on all entities with one deduction, and a 1% asset tax on the top 10% of wealth holders. All protected by constitutional amendment.

This plan is an order of magnitude closer to equity than our current system.

And we wouldn`t want a fair tax code, now would we?

"Also, can America's schizophrenic desires for lower taxes and increased social programs be reconciled?" In my humble opinion I think most American's (myself included)have such a cavalier attitude about debt that they forget (or don't care) that an increase in the national debt is the current way of reconciling these two desires. But isn't this is the way most of us live - well beyond our means - mortgages, car payments, credit card debt etc. Yes, the first two are necessities and some times the credit cards but how much of our personal debt isn't due to necessity - its because we want what we want and we want it now. Fiscal restraint- what's that? So why should we expect our government to treat us or its finances any differently when we say "give us what we want and don't expect us to pay for it and do it now." Charge it! Think about the mortgage crisis for a moment along these lines - irresponsibility reigns, we wanted it, we got it, we can't afford it, please dear government bail us out but don't raise our taxes. Is there a pill that will cure this schizo mentality other than complete fiscal collapse - personally and nationally?

Judging from the list of interviewees, it's no doubt that this is just more propaganda for the 'Fair Tax'.

Answer the petition, or else.

I just want to know, as a privately owned company ( or institution if you will) just how much does the federal reserve bank pay in taxes each year? After all they regularly give billions of dollars to private individuals in order to "stimulate the economy" so just what % of that money is taxed?

The film is scheduled to be released in late Oct. or early Nov. You can find out more by visting: www.aninconvenienttax.com

Any news of when this documentary will be releasing?

I taught a federal tax course from 1975 to 1982 as a member of an adjunct faculty of a graduate tax program. I would mention at the first class that I took my first tax course in 1953; that the 1954 Code followed; that there followed numerous tax acts, sometimes annually, many with the word "reform" in the title. And look where we are today, still seeking reform. Is true reform possible with so many of us (tax and business attorneys) out there searching for loopholes? True tax reform might reduce the need for tax and business attorneys.