A Tale of Two Job Markets for Law School Grads

My co-blogger Bill Henderson (Indiana) has done more than anyone I know to puncture the myth of the rosy job prospects for most law school graduates.  His post on the bimodal distribution of starting salaries for the law school class of 2006 includes this chart from NALP, which he accurately calls the Best Graphic Chart of the Year: 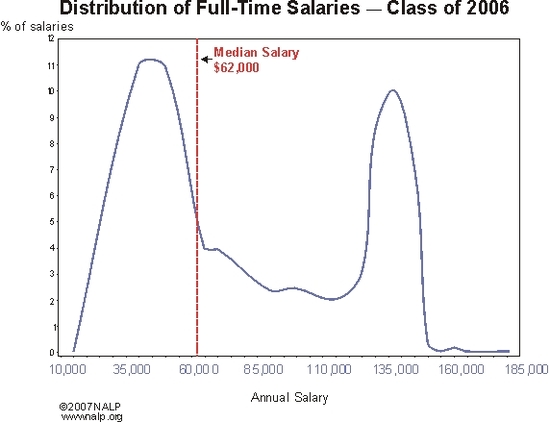 In his Friday post, Bill traces the history of the bi-modal salary distribution pattern with salary data from the law school classes of 1991, 1996, and 2000.  He explains How the "Cravath System" Created the Bi-Modal Distribution:

What are the market forces that have created this peculiar salary structure? In my working paper, Are We Selling Results or Résumés?: The Underexplored Linkage Between Human Resource Systems and Firm-Specific Capital, I posit that the runaway $160K mode is a confluence of two factors: (1) the continued growth in the corporate legal services market, primarily due to the growing scale and scope of transnational corporate activity; and (2) law firms' nearly universal adherence to the "Cravath system," which purports to hire the best graduates from the best law schools and provide them with the best training.

Listed below are links to weblogs that reference A Tale of Two Job Markets for Law School Grads:

This should be required reading before anyone takes the LSAT.

Don't despair, though, IU3L. The BigLaw factory isn't the only path to success in the legal profession.

Curious that the chart is from NALP. I don't recall ever seeing it in the legal employers directory or distributed during OCI season. I'm definitely going to email this around.

"The ABA should mandate that all promotional literature for all law schools include this chart."

The ABA is too busy mandating that law school's violate the anti-affirmative action laws of their respective states.

In an educational system with such stark achievement gaps, defining the "best graduates" from the "best law schools" is amorphous at best and is probably just subterfuge to maintain aristocracy and elitism.

The ABA should mandate that all promotional literature for all law schools include this chart.