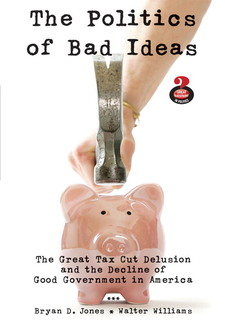 According to political scientist Bryan D. Jones and policy analyst Walter Williams, tax cuts are bad for the American people. In their new book, ... they draw on in-depth research and insightful analysis to argue that tax cuts without spending limits have harmed the government’s long-term fiscal stability, and explain why, despite evidence to the contrary, people keep believing that reducing taxes will create economic growth.

Jones and Williams zero in on two tax-cut theories: supply-side economics – which postulates that tax cuts stimulate the economy by putting more money in people’s pockets, which they in turn spend on goods and services; and starve-the-beast policies – which claim that government programs will shrink if there is less revenue from taxes to spend.

Walking readers through the numbers and factual evidence – from the post-World War II golden years through George W. Bush’s presidency – they argue that tax cuts don’t “pay for themselves” or cause “government to get smaller”, as proponents have claimed. Instead, they prove that tax cuts have consistently resulted in bigger government and increased deficits. “As government has grown, taxes have been cut, and revenue has declined,” say the authors. “The result has been massive borrowing and a basic deterioration in the fiscal balance sheet.”

The authors note that despite overwhelming evidence to the contrary, politicians and the American public continue to put faith in the power of tax cuts to stimulate economic growth. Jones and Williams believe that the usual suspects – including self-centered voters, partisan advantage, interest groups and lobbyists, and right-wing activists – are partly responsible, but they argue that institutional failure is the root cause. “These bad ideas were once kept in check by a firm commitment to factual analysis and the construction of an institutional framework that made it costly to ignore the evidence,” they say. “Today, all this has collapsed.”

Listed below are links to weblogs that reference The Great Tax Cut Delusion and the Decline of Good Government in America:

I often find that "commentators" equate the health of the economy at the exact point in time at which taxes were raised/cut. For instance, a recent documentary posits that the tax raises under George H.W. Bush saved Reagan's legacy because the U.S. didn't have to live with the government that would have resulted; of course, we were fine while Reagan was still in office.

Does this book give heed to the DELAY that's required to evaluate results of tax rate shifts? If not, perhaps someone should write solely about that, so that we can put an end to this "times were great/poor under Reagan/Carter" banter.

Jones and Williams are spreading absolute nonsense with this book. Who is funding it? The Obama campaign?

Folks, just remember how great we all had it under Jimmy Carter.

So the USTREAS reports of increased revenue following tax-rate cuts is not regarded as evidence? Certainly, net income to the treasury is the real story, and historically, we all agree that Congress has never spent less from one year to the next. I posit that not cutting taxes to stimulate the economy would result in larger deficits.