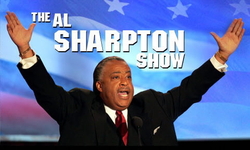 The Associated Press is reporting that Al Sharpton and his business and nonprofit entities owe nearly $1.5 million in taxes, interest, and penalties:

[T]he U.S. attorney is investigating his nonprofit group, a probe that an undeterred Sharpton brushes off as the kind of annoyance that civil rights figures have come to expect from the government. "Whatever retaliation they do on me, we never stop," he told the AP. "I think that that is why they try to intimidate us."

Over the past year, Sharpton's lawyers and the staff of his nonprofit group, the National Action Network, have been negotiating with the federal government over the size of his debt, which they dispute. The group has also been trying to pay off tens of thousands of dollars it owes for failing to properly maintain workers compensation and unemployment insurance. ...

Sharpton's own debts include $365,558 owed in New York City income tax and $931,397 in unpaid federal income tax, according to a lien filed by the Internal Revenue Service last spring. His for-profit company, Rev. Al Communications, owes the state another $175,962 in delinquent taxes. As for Sharpton's personal tax debt, King said Sharpton has started paying it off but contends that faulty record-keeping by the National Action Network led the government to overestimate his tax liability.

Tax headaches are nothing new for Sharpton. The 53-year-old minister has been assailed over his career for running up big tax debts and failing to abide by rules governing his charities and election committees. He is perpetually being sued for failing to pay his bills

In December, Sharpton revealed that as many as 10 of his associates had received grand jury subpoenas. A person familiar with the investigation told the AP that the FBI and IRS are probing whether Sharpton or his organization committed tax crimes or violations related to his 2004 presidential campaign, during which he was forced to return public matching funds for breaking fundraising rules.

Listed below are links to weblogs that reference AP: Al Sharpton Owes $1.5 Million in Taxes:

It's funny seeing celebrity stories like this. Like when Charles Barkley owed a casino millions upon millions. Poor guys, hopefully he pays it back soon.

Abortion is a good thing for all races not just blacks. Unfortunately Afro-Americans being usually in a lower income bracket have a harder time independently supporting their kids. Don't be ignorant, abortion is not a bad thing, step aside from beliefs and look at the world in a macro POV. We going to have too many people in this world. If not abortion people going to do it themselves via wars and famine.

Al Sharpton is propped up by the mainstream as a leader in the black community because he supports the genocide of the black race in America through abortion. (HE also supports gay marriage, unlike most other ministers). It has been pointed out by a former member of NARAL that eugenicist Margaret Sanger and her cronies envisioned championing influential pro-abortion black ministers to sway black mothers into promiscuous lifestyles, and the eventual killing of their unborn offspring. The majority of African American children are now killed before birth in NY and several other states.