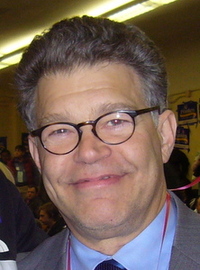 Al Franken's career as an entertainer made him famous and rich and positioned him to run for the U.S. Senate. But now, just as he appears on the verge of securing the DFL endorsement to take on Republican Sen. Norm Coleman, Franken could be tripped up by missteps in the way his show business enterprise was run. ...

On Friday, Franken's campaign manager, Andy Barr, declined to say whether Franken had paid taxes on earnings in California between 2003 and 2007. He said Franken's accountant is working with California officials to sort things out.

The latest Republican charge that Franken's taxes there have gone unpaid comes in the wake of earlier disclosures that Franken failed to pay workers' compensation and disability premiums in New York and botched the dissolution of his California corporation. Since then, Franken has paid more than $25,000 in fines to New York and still owes more than $4,700 in corporate taxes and fines to California.

» Franken's Tax Problems from UNCoRRELATED
Al Franken joins Hillary Clinton as yet another liberal-Democrat politicians who champions worker entitlements, but ain't so big on paying for them. The latest Republican charge that Franken's taxes there have gone unpaid comes in the wake of earlier d... [Read More]

AL Franken is almost as big a tax cheat as John McCain!

It is a small problem, paying taxes to the state where you live instead of the state where the income came from. That said, it points up how fragile Franken's campaign has been all along. He has built his frontrunner status completely on fundraising and celebrity. A more substantive candidate, Jack Nelson-Pallmeyer, has built a campaign on opposition to the Iraq war and concerns about global warming and energy sustainability. These are solid issues that affect the future of all, and less subject to the whims of group-think and the bandwagon effect.

Al Franken moved to Minnesota so he could be a US Senator, He is a member of the Democratic party, he is not just some small business owner from Pipestone.

The first time he's made anyone laugh in years!

The last time I looked Minnesota included state income tax refunds in the calculation of taxable Social Security benefits. They got that little fraud from IRS/US Treasury which has done the same thing since 1983. Who was the President and Vice-President back then? Oh, yes! Reagan and Bush! If you don't understand the problem, see section 111(a) of the Internal Revenue Code.

Words cannot describe how much I hate Al Franken. But the California corporate law sounds unfair.

In Florida if you don't file your corporate annual report you are dissolved by the state. Apparently, in California, if you don't file, they just keep adding up annual fees at $800 a year forever. That's not fair. They should dissolve you.

California seems a horrible place to do business.

Franken's career as an entertainer did not position him to run for the Senate. It positioned him to think he could run for the Senate. His innate schmuckdom will deflate his ego down the line when his Senate campaign ends in defeat. Any candidate demonstrating such ineptitude in handling business affairs and lack of compliance with tax laws is a joke.

I know a guy who grew up down the street from Franken in MN. He tells me that Franken was the biggest SOB he has ever met in his entire life.

I was kind of hoping that this site would go into the details of how much trouble he's in if any, whether his attempts to blame this on a mistake by his accountant are credible or not, etc.

Also, it would be great if this site wouldn't link to Wikipedia. By linking his name to his entry at WP, that ever so slightly increases that WP entry's search engine rankings. Since many WP pages are inaccurate or misleading, you might consider giving that search engine "juice" to a more credible page.

Funny how the "raise taxes" crowd seldom seem to actually pay them....

Seems Franken would fit in just fine in Congress.

Wesley Snipes could use some company for the next four years. Just sayin'.

If they want a job telling me how *I* must behave, THEY gotta follow the same rules.

I'm shocked. Who could imagine a good liberal cheating the unfortunate on worker's comp, and denying the government their rightful due in collecting from the wealthy in order to do good among us?

The pic of Frankenschmuck posted for this article speaks volumes....it shows that he looks exactly like what he is....an arrogant,condescending self-absorbed jerk who thinks of himself as somehow exempt from the drudgery of actually obeying the laws and following the rules that bind mere mortals...no doubt there will be more disclosures like this which will affirm the worst about him...enough to feed my schadenfreude for quite a while

If Al was anything but a liberal Dem the headline wouldnt have been about "Business Mishaps" he'd have been characterized as the king of the tax evaders.