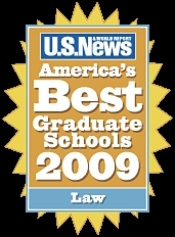 Update:  These schools have issued press releases in response to the U.S. News rankings:

For North Carolina the fall from 36th to 38th is worse than it looks. The school was 27th just two years ago.

Indiana's claim that they are the only Big 10 public law school not to drop in this year's rankings is incorrect; Penn State Dickinson rose from 92nd to 77th.

The difficulty with your duping theory is that the alumni who care already have strong views about what the rankings mean. The same alumni who think 2 moves up is great this year thought that the 2 moves down the previous year was a sign of a school in decline. There is no "conning" going on because the alumni don't assess the meaningfulness of the U.S. News from the press releases put out by their former institutions.

No, what is 'meaningful' is not in the eye of the beholder. If a school touts their improved rank as showing their school is better, then they are simply duping their alumni. You apparently think that's fine. Others, including the alumni, might be concerned to know that they were being conned by an 'irrational' figure.

To "anon." As Hans points out, it's the same phenomenon as powers irrational market fluctuations. I don't see the "trick." There is no misrepresentation, nothing "misleading." What is "meaningful" is in the eye of the beholder.

In reply to cyclingprof: so basically schools should trick their alumni into giving money by advertising results that they, in fact, know to be meaningless and misleading?

It's the same effect that powers irrational market fluctuations. Even if I know the numbers are meaningless, I may expect others to consider them meaningful. Thus I may expect them to have effect. Thus they become meaningful for me. I don't understand Leiter can't wrap his head around this cycle.

Leiter is too hard on schools that advertise improvements in the rankings. Even a school that fully appreciates the statistical insignificance of any improvements would be foolish not to advertise them. The good news excites alums and students, who do not understand just how meaningless is the difference between 36th place and 68th place in the rankings. A jump in the rankings creates the impression of an upward trend that may lead alums to open their wallets a bit wider, and that's good for the school.

Maybe someone should think about a 3 year, 5 year, and 10 year average of these scores/rankings (like with mutual funds).

I know my alma matter has hovered around the top 25 for many years. Not to validate USN Rankings, but a 5 or 10 year avg would provide a much more realistic portrait of USN's ranking of the school. Will USN provide this result alongside the 1 yr results, or will someone (like Leiter--hint hint) have to do it for them?

If you wouldn't invest your money in a stock or a mutual fund based on how it did just one year, why should you invest in a law school based on one year's results. and if your stock or mutual fund dropped (or plummeted) one year, would you dump what was otherwise a fundamentally solid investment? you might reanalyze whether the investment is fundamentally solid, but you wouldn't panic that your stock now was #27 instead of #24. You might panic if you invested in the financial sector (or a law school whose signature program seemed to be obsolete or in a down cycle).

but c'mon people. i bet most law students have less invested in the market than they have "invested" (and "speculated") in their law school education--6 figures. perhaps they, and law schools too, could learn a little from the buy & hold strategy of law term investing and the fact that short term gains & losses are not necessarily reflective of long term outcomes.

Don't forget Pepperdine which has moved up nearly 40 spots in the last 2 years by reporting questionable emp. at 9 mo. figures, most recently telling usnews that 95% were empl. at nine monts, which is an absolute fairytale: