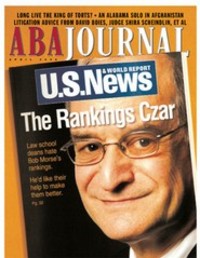 Check out the cover story in the April 2008 ABA Journal:  The Rankings Czar: Law Deans Hate Bob Morse's Rankings; He'd Like Their Help to Make Them Better, by Lynda Edwards:

Distraught faculty and students wrote scathing critiques of her performance on blogs and computer bulletin boards, noting the school had plummeted nearly 20 spots during her six-year tenure.

Rapoport resigned. ...  “Am I the poster child for why the U.S. News & World Report rankings are bad?” Rapoport wondered last year in her blog. It’s perhaps more accurate to say Rapoport’s Houston ordeal scares the bejesus out of deans. Her tears are emblematic of the nerve-shredding power U.S. News rankings hold over deans, faculty and students. ...

“It would be hard to overestimate the effect law school rankings have on everyday campus life,” says Paul Caron, dean of faculty at the University of Cincinnati College of Law and a vocal critic of the magazine’s methodology. “Students worry about how a ranking will affect their chances of future employment. Faculty worry about whether a drop in rankings will make it more difficult to be published in law reviews. Deans feel that they will be judged by how many places up or down the school moves in the rankings.” ...

“I think rankings need to be changed, and the only way that will happen is if law school deans sit down with Bob Morse for honest discussion,” Rapoport says. “I would attend a meeting like that without hesitation.”

Morse says he understands and agrees that the rankings are not perfect, and he would like nothing more than to discuss with law school deans ways to improve them. “Deans are welcome to call me or come by my office in Washington,” Morse says. “I want to work with them to improve the rankings.”

But to discuss the rankings would be to validate them in the public eye, and the deans and other critics seem to remain reluctant to do so. ...

Caron of the University of Cincinnati edits an online publication known as TaxProf Blog that, despite being exactly what it sounds like, often becomes a forum for venting about law school rankings. “How does a school leap 21 slots or drop 20 slots in one year?” one professor asks in a typical entry. “Did faculty leave en masse from one to the other? Any ranking with that much volatility seems questionable.”

Caron says his own university does not publicize its place in the U.S. News rankings (57th for 2008) or wheth­­er it rises or falls. He is the publisher of Brian Leiter’s Law School Rankings, an alternative to the newsmagazine’s list. “But the U.S. News rankings are the most famous and influential among potential students; there is no close second,” Caron says.

Caron has studied U.S. News rankings and writ­ten law review articles arguing that they lack transparency. He finds it frustrating that any school’s ranking depends so heavily on the most subjective of categories—reputation. “There is no way of knowing whether the magazine has geographical diversity among the lawyers and judges it surveys or even how many bother to respond to the surveys,” Caron explains. (A U.S. News webpage says 71 percent of university deans and law school faculty and only 29 percent of lawyers and judges responded to the reputation survey in 2008. Morse said response rates are similar for all the magazine’s graduate school rankings.)

Caron offers this solution for law schools: Instead of castigating or ignoring the rankings, sit down with U.S. News researchers and hammer out improvements. “Students want accountability—some way of knowing that the huge loans they are acquiring will help fund a good, solid education,” Caron says. “I believe in account­ability. Right now, the rankings we have don’t measure accountability. But I think we can make them better and more precise.”

Caron believes a big splash of glasnost can help scour away the animosity between law schools and U.S. News. He wants the magazine’s website to post the details of its methodology, including the names or institutions that respond to the surveys. He believes the magazine owes readers, as well as students, more explanation of the difference between the 100th-ranked school and those one tier lower.

In any other ranking system, the difference would seem slight. But here, descending one slot is a soul-annihilating freefall into the lower pits.

“Sunshine is the best disinfectant,” Caron quips. “Most of the statistics the magazine uses are the same stats schools report to the American Bar Association. Reputation is the one category that is completely the responsibility of U.S. News.”

A numerical ranking is not subtle. It cannot illuminate the nuances of a school’s mission. Caron realizes schools below the 50th place find it harder to get the word out about achievements like impressive new faculty hires or even endowments. Yet, he points out, urban law schools like his often mesh better with student goals than a school ranked in the top 20.

“We have several high-powered law firms and Procter & Gamble headquartered here in Cincinnati and they recruit heavily from our school,” Caron says. “Not every young lawyer is happy in a huge, often impersonal North­eastern law firm. Yet there is valid data indicating the U.S. News rankings are skewed in favor of North­eastern universities partly because of the way reputation is evaluated.” ...

Morse says an indiscreet emphasis on the rankings suggests a deep misunderstanding both of what they are and how they should be used.  “Any student or parent who uses the rankings as the No. 1 reason to go to a school, well, that’s exactly the wrong way to use them,” Morse says. “The rankings are a tool. They give deans and students useful statistics for comparisons. But there are a lot of factors that go into evaluating whether a school is the right fit.”

Listed below are links to weblogs that reference ABA Journal on the U.S. News Law School Rankings: