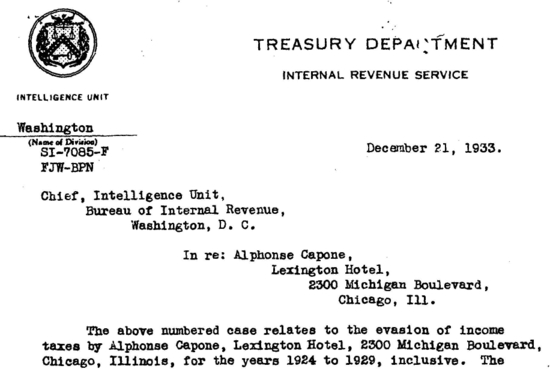 In response to a FOIA request, the IRS has released documents relating to the investigation and subsequent tax evasion conviction of Chicago mobster Al Capone.  Although the IRS is required to keep taxpayer records confidential, the IRS released these documents because Capone never filed a tax return:

In 1931, the IRS’s Intelligence Unit completed an investigation of Alphonse Capone which led to his conviction for tax evasion for which he served 11 years in prison. A recent Freedom of Information Act Request for a copy of Special Agent Frank Wilson’s report to Elmer Irey about the Capone investigation led to a review of the records in light of the confidentiality provisions of Internal Revenue Code Section 6103. The review concluded that this information could be made available to the public – principally because Capone never filed a tax return.

The following are copies of reports and letters from the actual file which summarize the events and activities of the three year investigation of Al Capone:

Listed below are links to weblogs that reference IRS Releases Documents from Al Capone Investigation:

» THEY GOT CAPONE ON TAX CHARGES from Roth & Company, P.C.
Another serious criminal has been brought to justice on tax charges, reports UnionLeader.com: The man who operated a Seabrook crematorium... [Read More]

» Why Is Al Capone In The News? from Unfiltered Opinion
My wife is an aspiring law school professor. One of her favorite blogs is the Tax Prof blog, which discusses various tax related issues. Yesterday, she noticed on the site that there was a posting regarding the late mobster, Al [Read More]