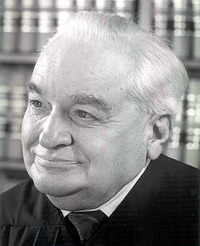 Judge Sneed was the author of two opinions that are staples in most income tax casebooks:

Judge Sneed started his career at Texas. When you talk to the oldest Texas tax graduates, it was Judge Sneed who was the intellectual star. He went from Texas to Cornell to Stanford. He was raided to the Stanford faculty in a big raid that included Gerald Gunther, Charlie Meyers and Howard Williams from Columbia, and which suddenly put Stanford on the map. He left Stanford to become the dean at Duke.

President Nixon, a Duke graduate, lured Sneed to become an Assistant Attorney General in Washington. Judge Sneed often hinted that Nixon promised to appoint him to the U.S. Supreme Court. As the Judge recounted to his law clerks, after he pressed the Attorney General Mitchell to launch an investigation of the Watergate burglary, he received an anonymous note in his top drawer asking him to write down on the inside of the note his preferred judicial position and geographic location. He wrote down, “Ninth Circuit and San Francisco” and as the note indicated he left the note in his drawer. One week later, President Nixon appointed him to the Ninth Circuit Court of Appeals in San Francisco. Sneed never found out who had left him the note. That is the reason that Sneed was a very short lived Number 2 in the Nixon Justice Department. On the Court, he was known as a compassionate conservative who often broke ranks to join Judges Fletcher, Nelson, and Reinhardt in cases that pulled his conscience.

He wrote a very interesting book called Configurations of Gross Income, which I read with line by line care in preparation for teaching. It was a thoughtful commentary on the common law of tax, written when tax was thought of as a branch of the common law, and when there was no Chirelstein and no close competitors giving an overview of what intellectual system beginning teachers were supposed to teach.

He has some wonderful tax opinions. Estate of Franklin was for years the best anti-shelter case afloat and followed (with too much delay) by a cascade of cases coming to grips with the fact that nonrecourse liability was often not real debt, notwithstanding Crane. In Olk, Sneed single handedly overruled the Supreme Court's decision in Duberstein, as to gifts, holding that tokes were taxable to the casino dealer as a matter of law and not as a matter of life in all its fullness. Tokes were provided in connection with the performance of service and that test governs.

His daughter, Carly Fiorina, became the CEO of Hewlett Packard.

I took Wayne Barnett and not Sneed at Stanford because Sneed required homework and a midterm. I can't say I ever regret taking Wayne Barnett. He converted me to a tax lawyer, uphill,against the tide over insurmountable barriers, when I would said that was nonsense before hand. Still Joseph Sneed was a smart and honorable man.

Judge Sneed gave long and honorable service to the law.

Listed below are links to weblogs that reference Death of Judge (and Former Tax Prof) Joseph Sneed :

Thank you for your post about Judge Sneed. He was a brilliant legal scholar. He will be missed.