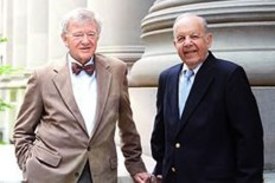 Nice tributes on the retirements of Harvard Tax Profs Bill Andrews and Bernie Wolfman in the Harvard Law Record:

William D. Andrews:  On the Right Side of the Equation, by Edward J. McCaffery (USC):

There is much to admire about Bill’s scholarship, but what I best know and love Bill from are three articles published in the Harvard Law Review, in 1972, 1974 and 1975—known to cognoscenti simply as Andrews 72, 74 and 75. Much of income tax theory in the 20th century was dominated by the so-called Haig-Simons definition of income, which holds essentially that Income equals Consumption plus Savings (I = C + S)—that all money or wealth (income) is either spent (consumption) or not (savings). Many have written about the income side of that equation: the importance of finding and taxing “all income, from whatever source derived.” The simple genius of Bill Andrews was to look to the right-hand, or uses side. What we are taxing—in an income tax—is consumption plus savings. This change of perspective effected a Copernican revolution in our thinking about tax. Andrews 72 pointed out that, while the arguments for source neutrality are compelling, those for use neutrality are far less so—just maybe, “we” do not want to tax all consumption, like medical expenses or charitable contributions, equally. Then, Andrews 74 showed that the “worst inequities and distortions” derived from the inconsistent tax treatment of savings. The contemporary consumption tax movement was born. Andrews 72 and 74 are my favorite law review articles of all time, but they deserve a far better compliment than that.

Bernard Wolfman:  A Man of More Than General Utility, by Howard Abrams (Emory):

And we learned that the tax bar was working hard to eliminate this peculiarity even though it reduced the taxes of the bar’s most sophisticated clients. In 1986, General Utilities met its overdue demise. I learned from its repeal that the tax bar has an obligation to improve the law and that the members of the tax bar take that obligation seriously. I learned that theory matters, that lawyers can be a force for legal change and especially for positive legal change. I learned many things from Bernie Wolfman and this was as important as any.

Listed below are links to weblogs that reference Tax Lions in Winter: Bill Andrews and Bernie Wolfman: