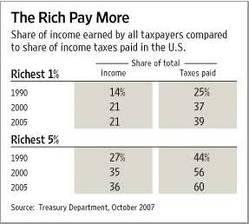 Every Democrat running for President wants to raise taxes on "the rich," but they will have to do something miraculous to outtax President Bush. Based on the latest available tax data, no Administration in modern history has done more to pry tax revenue from the wealthy.

Last week the Congressional Budget Office joined the IRS in releasing tax numbers for 2005 [blogged here and here], and part of the news is that the richest 1% paid about 39% of all income taxes that year. The richest 5% paid a tad less than 60%, and the richest 10% paid 70%. These tax shares are all up substantially since 1990, and even somewhat since 2000. Meanwhile, Americans with an income below the median -- half of all households -- paid a mere 3% of all income taxes in 2005. The richest 1.3 million tax-filers -- those Americans with AGIs of more than $365,000 in 2005 -- paid more income tax than all of the 66 million American tax filers below the median in income. Ten times more.

For the political left and most of the media, this means only that the rich are getting richer, so of course they're paying more taxes. And it is true that the top earners have increased their share of total income. Yet, as the nearby table shows, the rich showed more rapid gains in reported income shares in the 1990s than in the first half of this decade. The share of the richest 1% jumped to 20.8% of total income in 2000, from 14% in 1990, but increased only slightly to 21.2% in 2005. This makes it hard to pin their claim of "rising inequality" on the Bush tax cuts, though the income redistributionists are trying. By this measure, the Clinton years were far worse for "inequality."

Listed below are links to weblogs that reference WSJ: Taxes and Income:

If one reads the WSJ editorial, one would think that the rich are simply staggered by their tax burden. Think again.

But wait, why did the WSJ even pick the year 2000 as a starting point? Because in that year, the income of the very wealthy jumped significantly, but in the following years the income of that top tier went down due to the recession. However, even the WSJ editorial board cannot hide the fact that by 2005 the top 1% had recovered quite nicely, thank you.

The figures can be found here:

Let's not forget that President Bush lowered the tax rates on many items (capital gains, etc.). Thus, it makes sense that the wealthy took advantage of these tax rates by creating taxable income. (E.g., selling stocks that they had held for awhile, etc.)

So I think the WSJ article could be a bit misleading. The wealthy took advantage of lower tax rates so that they could pay less--not more--to the federal government. The same will apply in the year of the estate tax repeal. Watch out for lots of feeding tubes being yanked, etc. (And this administration calls itself pro-life? Only in words, not in actions.)