Why Are Law Professors So Unhappy? -- Part Two 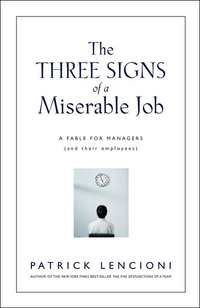 I previously blogged Tax Prof Michael Livingston's answer to the question Why Are Law Professors So Edgy?:

A friend of mine has come up with a novel explanation as to why law professors, who would seem to have a pretty privileged life, are so persistently uneasy. ... [T]he professoriate ... is one of the few activities that is (a) very competitive, (b) primarily personal (that is, noncooperative) in nature, and (c) almost entirely devoid of objective standards that might be used to measure success or failure.

A new book by Patrick Lencioni, The Three Signs of a Miserable Job (2007), supports this analysis:

The first sign of a miserable job is anonymity, which is the feeling that employees get when they realize that their manager has little interest in them a human being and that they know little about their lives, their aspirations and their interests.

The second sign is irrelevance, which takes root when employees cannot see how their job makes a difference in the lives of others. Every employee needs to know that the work they do impacts someone’s life--a customer, a co-worker, even a supervisor--in one way or another.

The third sign is something I call "immeasurement," which is the inability of employees to assess for themselves their contribution or success. Employees who have no means of measuring how well they are doing on a given day or in a given week, must rely on the subjective opinions of others, usually their managers’, to gauge their progress or contribution.

Listed below are links to weblogs that reference Why Are Law Professors So Unhappy? -- Part Two:

» Are Law Professors Unhappy? And, if so, Why? from Law Business
Paul Caron writes: I previously blogged Tax Prof Michael Livingstons answer to the question Why Are Law Professors So Edgy?: A friend of mine has come up with a novel explanation as to why law professors, who would seem to have a pretty privil... [Read More]

» Are Law Professors Miserable, and if so Why? from The Volokh Conspiracy
Paul Caron of TaxProfblog claims that law professors tend to be unhappy and tries to explain why. He argues that legal academia is a "miserable" j... [Read More]

» Are Law Professors Unhappy? from VeritasVincitBlog
An entry from the Volokh Conspiracy opined on Paul Caron's (Tax Prof Blog) recent entry about the happiness of law professors.Tax Prof Blog: "A friend of mine has come up with a novel explanation as to why law professors, who... [Read More]

speaking from experience: get over it!!!!!!!!!! Fat Man and KH are so right life is tough but for us law professors out there who are "UNHAPPY" there are plenty of people willing to switch with you. i mean, HAVE YOU SEEN YOUR PAYCHECK!!!!!!!! there are some poor peaple out there who might have the potential to take tough times like a boulder takes a hit from a 10 yr old who whieghs 80 pounds. if your to much of a cry baby to take tough times then go home and suck a bottle, ya whinny! you better have a dang good reason for being (so called) "UNHAPPY" as a law professor. you better go home get on your knees and thank GOD for atleast giving you a job. (that goes for christians like me only. but if your not a christian thats probably why your sad anyways!!!!!!!!!!!

Who would work for a company that offers that as a benefit, but tells the employee, you can't use it!!!!! Cheers.

Law professors blogging about their misery. Even your mother thinks you are a whiny little baby.

Face it. Nobody cares. Suck it up. Life is tough. Wear a cup.

All those law profs who are unhappy can feel free to to quit. There are plenty of us out here who would be happy to take your place (For some of us your job is our life's dream.) Being an unhappy law prof is like winning the lottery and then complaining because they deliver you a check instead of cash.

Unhappy? Puhlease! The more vicious the politics, the less actually at stake is the old canard, and by all accounts it applies to faculty meetings. Outside of that, they seem an awfully happy group as a general rule (at least those who remember their time as big firm legal practitioners). I often tease a law professor, who is a good friend, about her feeding at the public trough. She cheerfully replies, "oink, oink"!

How do you propose tell empirically between:

Person A - who is very unhappy, stoic and inarticulate

Person B - who is relatively happy, very articulate and wants to win the whine game?

Concerning the three signs of a miserable job, I would add a fourth that is much more obvious: A pathological micromanaging narrow-minded asshole for a boss.
If you have that "sign," the first three will follow.
PS I'm not a law prof.

"Sonoran desert for $22,000 a year and Michael Livingston's friend would be unhappy as a top ranked golfer on the PGA, according to this theory. "

i know plenty of people who were miserable in one job but flourished in other contexts...surely there is some correlation between one's work environment and his/her mood.

I have a son in middle school and a daughter who will be there next year. Sonoran desert? You bet. Middle school? No way. I'd be eaten alive.

1. Patrick Lencioni is obviously more ambitious than me, since he got a book out of it and I only got a blog. Alternatively, I may have other work to do.

2. I'm interested that people have denied that there is an element of anonymity in law teaching, but many seem not to sign their own names, at least not enough of them to be recognizable. Interesting.

3. I don't think the issue is whether people have lots of friends in teaching or good student evaluations. The point is, I think, that most people are smart enough to realize that popularity is very different from effectiveness or a real contribution. I do think that these surrogates are much weaker than, say, the amount of houses sold by a real estate agent, which is hard to argue with at least in that field.

I do think increasingly that the alleged unhappiness of many professors is something of a convenient pose. One proof of this is, many could return to practice if they really wanted to. But how many do?

Some happiness research indcates that happiness is genetic and work, family and friends only affect it within certain narrow bounds. You are, or you aren't. Rick would probably be happy teaching middle school in the Sonoran desert for $22,000 a year and Michael Livingston's friend would be unhappy as a top ranked golfer on the PGA, according to this theory.

By these standards, we all should be ecstatic about our jobs (and I am!). (1) Yes, the occupation is competitive, but in my experience, it's also extraordinarily cooperative. I routinely give and receive fantastic advice from my "competitors" on scholarship, pedagogy, job searches, administrative matters, etc. etc. (2) Success is not overly difficult to measure: you're successful if your class evaluations are well above average, you're publishing routinely, you are actively engaged in helping to build your institution, and (after you've been in academia for several years) you are regularly solicited to speak at conferences and to contribute written scholarship. (3) If "anonymity" (as defined above) is a problem, you need a new Dean, not a new occupation. (4) This is the best job in the world precisely because it is so easy to see how we make a difference in the lives of others -- our students.

"Primarily personal"? Hmm, the students in our classes and the people we work with on committees might think otherwise. Law teaching is an intensely interpersonal activity, it seems to me.