The Higher Education Research Institute at UCLA has released a report on Spirituality in Higher Education, based on surveys of 112,000 freshmen from 236 colleges in Fall 2004 and of 15,000 from the same group as juniors in Spring 2007.  The survey revealed that students tend to become more interested in spirituality, more caring, and more politically liberal during college [click on chart to enlarge]: 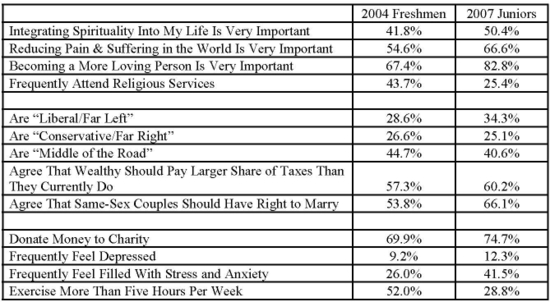 Listed below are links to weblogs that reference Students Become More Spiritual and More Liberal During College:

Cpt Obvious, the integration of spirituality in their lives does not have to corrispond with going to religious services. There are plenty of spiritual people that are not religious because they have a problem with organized religions. Also, society as a whole has had an increase in interest in alternative religions like Paganism and Wicca which do not have a frequent religious service.

Also, it can be inferred that the increase in responsibilities in college have cause the extra stress and less time to exercise, thus increasing their depression. Which in turn could be causing them to seek spirituality as a way to solve these problems. And depending on the religion they choose, they could become more excepting of the liberal life style.

Did they check on people not in college? Judging by election results, the general public became marginally more liberal in the same time period.

Well, the major correlation between stress and depression would be the fact that those third year students exercised less. Exercising increases serotonin levels, along with many other chemicals, that make you feel good.
The chemical changes during exercise can be just as addictive as any drug. And can have just as much a mood changing effect.

Proof that the more education you get, the less important religion is.

Another possible interpretation is that, having seen their friends flunk out, drop out, fail to get internships, suffer from alcoholism, etc. the 15,000 interviewed in 2007 got "scared straight"...

They are also much less frequently attending religious services. Perhaps if they returned to their prior level of worship, they would feel they had re-integrated spirituality into their lives.

But I'm more surprised the headline is about spirituality and being liberal. Each had a 20% increase, while stress and anxiety rose 60%.

What a funny survey! I'm just going to infer a correlation between the decrease in religious service attendance, the rise of liberalism and the increases in depression, stress, and anxiety, that okay?

The category with the largest change is exercise (deacrease of 23.2 points).

Perhaps that is the category that warrants the most attention of educators.