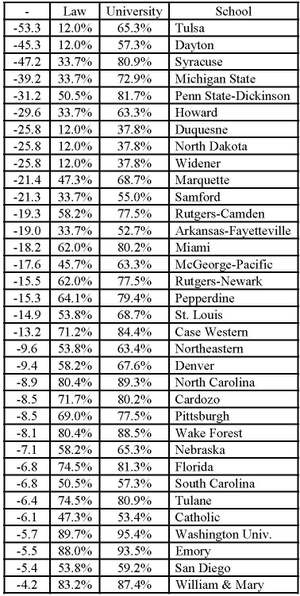 I have used percentiles rather than absolute ranks because U.S News ranks more national universities (262) than law schools (184)   I have assigned schools in Tier 3 and Tier 4 the percentile ranking of the midpoint of those tiers because U.S. News does not disclose the actual rank of those schools.

Listed below are links to weblogs that reference Law Schools Ranked Lower Than Their Parent Universities:

» Which Law Schools Rank Below the Undergraduate Institutions with Which They're Affiliated? from The Volokh Conspiracy
Paul Caron has the data, based on the U.S. News rankings; this complements his earlier post on law schools that [Read More]

Very good point about Rutgers, Mike. I'm sure the law schools were compared to the whole Rutgers undergraduate school, which is based in New Brunswick. Also, we need to take these rankings for what they are: rankings based on disparity. The two Rutgers law schools, with Miami and Pepperdine, are still ranked above the 55% percentile. Also, it is important to note that, for the most part, the better undergraduate schools are the ones with law schools in the first place, so their rankings on the US News charts are generally higher.

Tulsa sucks, period. The year they got the new Legal Information Center they jumped from Tier 4 to Tier 3 just by virtue of adding one of the nicest legal information centers in the country. That same year they dropped back to Tier 4. How do you do that?

I think the Rutgers scores are somewhat misleading because neither law school is on the main (New Brunswick) campus. If you rank them against the Camden or Newark campuses, where they are actually located, they would do quite a bit better here. Of course, this could be an argument for moving them.