Top 100 Most Influential People in Tax and Accounting 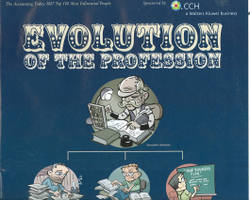 I am honored (and surprised) to be included on the list of Accounting Today's Top 100 Most Influential People for the second year in a row. The magazine contains one-sentence explanations of why each of the folks made the list; here is mine:

Caron has helped lead the profession's exploration of new media, and his blog, launched in 2004, is one of the most-visited tax blogs on the Internet.

I am honored to be on the list with such high-powered people in the tax and accounting worlds, including:

About This Blog, News | Permalink

Listed below are links to weblogs that reference Top 100 Most Influential People in Tax and Accounting: