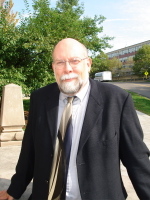 Give some houseroom to the idea that law schools have a stake in promoting a sophisticated public understanding of law. That's an idea that reflects inward as well as outward. Here are three such reflections:

2.  It's time to take your best students and teach them to write for their clients as well as for other lawyers. Most of our better people finish law school thinking like lawyers, and writing like nobody but lawyers will ever read their work (that might be truer than it should be; see 1. above). The true mark of mastery is the ability to clarify a subject for anyone -- especially those who make continuous professional use of the law without being lawyers themselves.

3.  It's time to move the idea of "interdisciplinary study" onward from "law of" toward "law and." This has taken place in some areas -- law and psychology comes to mind -- but others are begging for it. "Law of computers" has given us much in the area of copyright -- but "law and computation" would have a lot to say about how law is promulgated, seen, understood, considered, and changed.

Listed below are links to weblogs that reference Tom Bruce's Advice for Erwin Chemerinsky: Promote Public Understanding of the Law: