More on The Long Tail of Legal Scholarship 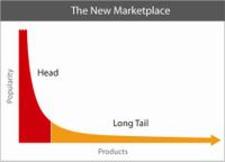 Chris Anderson’s book, The Long Tail: Why the Future of Business Is Selling Less of More, has attracted enormous attention since its publication in July 2006. His insight is that technology and the Internet have transformed the focus of America’s culture and economy. Whereas pre-Internet firms turned out a small number of “hits” or blockbuster products (the “head” of the demand curve), today’s Internet-era firms offer a broader range of niche products (the “tail”). This Essay argues that the long tail theory can help both explain the current state of legal scholarship and chart its future.

In contrast, I mined SSRN download data and found a much longer tail than is present in the citations data:

The Long Tail of the SSRN download data is reflected in the following chart showing the number of new downloads for law authors ranked 1001 through 3501: 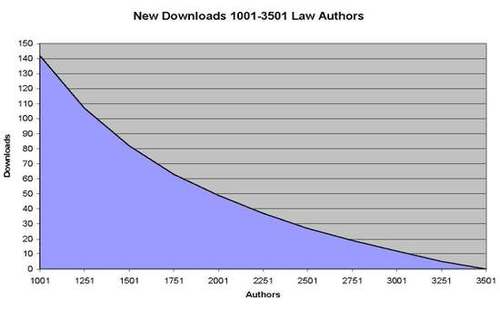 Bill Henderson (Indiana) is undertaking a massive project compiling 80 years worth of bibliographic data from the Index of Legal Periodical (ILP) with 85 years of biographical information from the AALS directory. He reported some preliminary findings yesterday, including that there are 314,331 authors and 750,000 articles (2.45 articles per author) in the ILP database. He noted:

Listed below are links to weblogs that reference More on The Long Tail of Legal Scholarship: