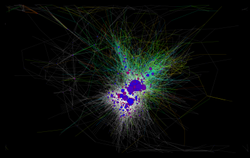 Everyone knows that the U.S. Tax Code is a complex beast. I wondered whether the complexity was merely in how the Code is used to compute taxes, or whether the structure of the Code itself had some discernable patterns to it. Without looking at the directions given in the text of the Code, could a person still be given a logical road map for using the code. Towards that end, I created a network model of the Tax Code, where statutes act as nodes in the network, and references between statutes act as the edges.

Network models are often created so that patterns and structures can be found in the underlying data. Patterns in the data could indicate one of two things: either the data was created with that pattern in mind (as is generally the case with man-made objects) or that there are avenues of research that we can take in investigating the underlying cause of the pattern (as in the case of natural formations). We always hope, and often expect, to find some kind of pattern. The human mind is excellent at finding patterns, so much so that we see images in clouds where none exist.

Unfortunately, no patterns expose themselves in The Tax Map. This is an important point, as the tax code, law made by the US Congress, should, by all right, have a comprehensive structure to it. It is obvious, just from looking at it, that it was not planned. Parts were added and subtracted for convenience, without thought given to the code as a whole.

Listed below are links to weblogs that reference The Tax Map: