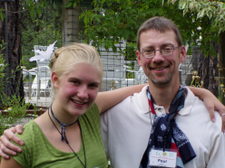 Saturday:  We left at the crack of dawn for the drive to East Fork Lake.  It was bitterly cold and wet, but my daughter bravely left the warmth of the school's tent for her 4-person boat's first heat.  The other parents and I trudged to the edge of the lake to cheer the girls on, but their boat did not appear at the scheduled time.  Over an hour passed as other heats raced in front of us and we sunk up to our ankles in the mud.  We were getting very concerned about the girls having to wait at the dock in those conditions, when the race officials announced that the regatta was cancelled because several girls were transported via ambulance to the local hospital for treatment for hypothermia.  Where were our daughters?  We hurried back to the tent to learn that the girls had been sitting the whole time in one of the coach's cars in the parking lot with the heat on!

I took my daughter and her friend back to our house, where after showering the girls sat on the living room rug curled up in sleeping bags doing math homework for 3 hours while I worked at the kitchen table.  It was a neat afternoon, listening to them talk about their school work and the upcoming party that night.  After beginning preparations for the party (which I learned to my horror was going to include boys!), they asked me to drive them to the other girl's house to finish getting ready.  I did so with a heavy heart, wishing I could keep my stunningly beautiful daughter tucked in her sleeping bag at home. 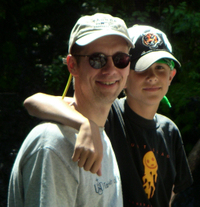 Sunday:  My son and I left at 6:45 a.m. for the 45-minute drive to the Mid-American Soccer Classic.  His team had won both games on Saturday, and we half-joked on the drive that we hoped they would lose the game so we could come home right after the game -- he to do homework, me to work.  If his team won, we would have to stay at the bitterly cold, wet, and windy fields until late afternoon for the championship game.  I tried to suppress a smile on the sidelines as his team fell behind 1-0 in the first half, but they stormed back and won 2-1.  I had mixed emotions as I walked to the sidelines to meet him after the game when I saw a tournament official walk up to my son and hand him something.  I later found out that he had been named player of the game.  My usually taciturn son was ebullient over breakfast at the Bob Evans we retreated to as we awaited the championship game.

The afternoon game was delayed for 90 minutes, and there was no Hollywood ending as my son's team was up 2-1 in the second half before giving up three late goals to lose the game.  After getting home 10 hours after we had left that morning, my son took a long hot bath to warm up and then fell asleep.  As I went to wake him up to do his homework, a lump formed in my throat as I looked at my 6-foot, 160-pound chiseled 16-year old man-child lying in the same bed in which I wouold tell him stories not so very long ago.

I know that years from now, after my kids have moved away, whenever I am cold and wet I will think about this weekend.  And remember that "[t]here is a time for everything, and a season for every activity."  Ecclesiastes 3:1.

Listed below are links to weblogs that reference A Father's Strange Bliss:

Prof. Caron, what a touching story. Thanks for sharing your insights. It's easy to forget that in the long run, it's family and relationships that matter most in life -- not just tax policy!