I remember two of my uncles laughing when I told them about my tax classes. They claimed never to have paid taxes. Looking back, I’m not sure if they were tax protestors, tax cheaters, or bad farmers. Actually, I think they were just pulling my leg, but when I suggested that to them, they just laughed some more.

I come from a small town in Kansas, called Ellinwood. My parents were born and raised on small farms a few miles outside of town, as were their parents. Our ancestors who settled those farms had left Germany in the mid-1800s to avoid the draft.

My dad never attended college; mom had one year at Fort Hays State. Unlike my brothers, I left Kansas to pursue higher education, ending up in Denver, a six-hour drive to the west. I majored in accounting and economics because I liked the professors who taught those courses.

Following graduation I entered the Society of Jesus (a.k.a. the Jesuits), having a few months earlier gotten what some people refer to as a “calling.” My Jesuit superiors and I eventually agreed, however, that this particular calling had been a wrong number. I returned to Denver, worked at Touche Ross for one tax season, and then taught accounting and economics at Metropolitan State College while attending law school, mostly at night. Midway through my 2L year I met my wife, Susie, on bus #6. I had boarded it across the street from the church where I was the live-in custodian. She introduced herself as Susie Worm, and added, “That’s Worm, as in apple.” Of course I fell in love immediately. Several months later we married. She refers to our chance encounter on that bus as, “a fare to remember.”

Sometime during my 3L year I decided to get a tax LL.M. Susie had no problem with that until I told her that the go-to program was in New York City. Some years earlier she had been there with her class from Divine Savior/Holy Angels High School in Milwaukee. According to her, one of the first things they saw from their bus windows upon entering New York City was a guy on the side of the street opening his trench coat to reveal an absence of clothes. She said I could spend a year in New York City if I wanted to, but that she would not be with me.

We ended up at the University of Miami, and considered ourselves fortunate to get a tuition waiver for the first semester. Because the LL.M. program director, Phil Heckerling, had stressed to me in writing that the waiver was only for one semester, I accepted that as a given. Shortly before the second semester started, however, Susie instructed me to ask for another waiver. I explained to her that Professor Heckerling was a man of exceptionally strong opinions, and that it would be a waste of time to ask him to change his mind, but she insisted, and so I gave it a shot. It turned out that Heckerling remembered meeting Susie and hearing her introductory line, “that’s Worm, as in apple.” He gave me the waiver.

After Miami, Susie and I returned to Denver and moved back into the church apartment. She started having and raising our babies while I practiced law by day and taught as an adjunct professor at Denver University at night. I enjoyed practicing tax law, but not nearly as much as I enjoyed teaching it. So after three years of tying to do both, I took a full-time tax position at Hamline University in St. Paul, Minnesota. Susie and I thoroughly enjoyed the twin cities, but when a tax position opened at Washburn in my home state of Kansas, I eagerly applied.

In those days I was giving CLE seminars for state bar associations and CPA societies (e.g., “Ten Techniques for Shifting Income from a High to a Low Bracket”). One summer I made 46 separate 8-hour presentations. In the fall of 1981 the Hawaii state bar association sponsored my “Ten Techniques” program, which gave Susie and me (and our 3-month old #3 child) a long weekend in Hawaii. That was more than enough time to convince me of where we should move. Susie was less enthralled with the Islands than was I, but since Honolulu was not Topeka, she agreed to let me interview for an opening at the University of Hawaii. Six months later we were living in Honolulu, and that was twenty-five years ago. I still teach the basic tax course, but now I also teach Trusts & Estates, Nonprofit Organizations, and Professional Responsibility. 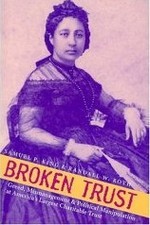 In 1997 I taught as a visiting professor at the University of Chicago. Two years before that the Wall Street Journal had called Hawaii’s Bishop Estate “the nation’s wealthiest charity,” and had raised a number of troubling questions about how it operated. I recall lunches at the Quadrangle Club where Chicago professors wanted to know more information about Bishop Estate than I could provide. Upon returning to Hawaii, I began researching a piece that became known locally as the “Broken Trust” essay. Senior federal district judge Sam King and I recently co-authored a related book called, Broken Trust: Greed, Mismanagement & Political Manipulation at America’s Largest Charitable Trust. We’re giving all royalties to early childhood education charities in Hawaii. I’ll end this sketch with three quotes about the book:

Professors can get a complimentary copy of Broken Trust by emailing me their mailing address.

Each Saturday, TaxProf Blog shines the spotlight on one of the 700+ tax professors in America's law schools. We hope to help bring the many individual stories of scholarly achievements, teaching innovations, public service, and career moves within the tax professorate to the attention of the broader tax community. Please email me suggestions for future Tax Prof Profiles. For prior Tax Prof Profiles, see here

Listed below are links to weblogs that reference :